♪Does any one know where the love of God goes when the waves turn the minutes to hours?♫ - Gordon Lightfoot, "The Wreck of the Edmund Fitzgerald

So, this morning, I sat in a large classroom teeming with Grade Sixes buzzing around their exhibits for the First Nations/Métis/Inuit Fair, and watched the second hand of the clock go so slowly, it was damned near going backwards.

Okay, I admit it. I'm a ba-a-a-a-d mother. I loathe field trips, sports days, student-led conferences, parent-teacher interviews. I go to them because I have to. Because I believe visible parents are a good reminder for teachers. Last night, I spent the better part of an hour concocting so-called Arctic Paradise Punch from a mixture of cranberry juice, orange juice, lemonade and ginger ale. It was from a recipe that appeared in The Vancouver Sun not long after the Northwest Territories Pavilion was one of the hits of Expo '86. Frankly, I doubt the Inuit of yore had much access to cranberries, oranges, lemons, or ginger ale, but what's good enough for the official Northwest Territories Pavilion is good enough for my daughter's Inuit exhibit, dammit. 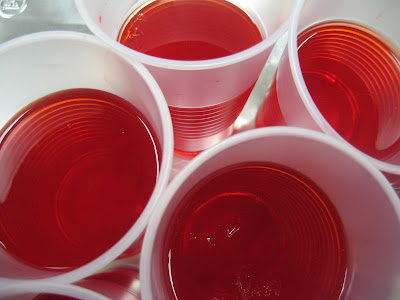 It took three goddamn hours. I spent the first hour helping younger daughter pour and pass aforementioned punch. I spilled it; she kept telling me "I'm twelve years old, Mom...." The next half-hour was spent trailing judges and having younger daughter recite the two-paragraph write-up she'd memorized. (Refused to read it, because she'd memorized it, then spent agonizing seconds trying to recall the next sentence while her audience assumed she'd finished and asked questions, thus throwing her off more...). Then that half-hour watching the clock inch along. The next half-hour waiting for the judges to show up, go on and on about what a good job everyone had done, say several things about each of the dozen exhibits, then get into a debate about announcing the winners which culminated in the kids' being sent to lunch with instructions to return and find out who won...

The winners got medals, the honourable mentions didn't, and everyone who didn't get a medal is apparently pretty cracked up about it, including my daughter. Also, I think I heard them say that the honourable mention groups will be accompanying the winning groups to the Regional Fair in April. No-o-O-O-O-o-o.....
Wailed by Persephone at 2/06/2009 11:14:00 am

I laughed out loud with your 'traditional' drink recipes.

I too am a baaad mother. Science Fair is coming up at our school and I'm already avoiding it. I may flat out refuse to do anything but drive them to a store where they (okay, I) can fork out < $100 for the 'components' of their experiments and leave it at that. At least they will truly have done the work by themselves. Or not.

Hi tentativeequinox! Thanks for stopping by! I've come across your blog before, so I think we hang out in some of the same places in cyberspace. I gather we're both in what I think of as The Sisterhood; my younger daughter's last label was PDD-NOS, and my blog has touched upon the joys and trials of getting her educated alongside typically developing kids.

Hey Persephone, sorry I missed your reply to my initial comment.

Yes, I think we can start a club of Canadians of the Sisterhood who are fans of God Behaving Badly.

PDD-NOS. That's an impressive amount of letters that seem to mean you probably don't qualify for any assistance money. Am I correct? My daughter was on the cusp of that I think. But managed to be disinterested enough in the testing to be pushed over into the funded category of autism. It's a crazy system.

My heart went out to you when you described sitting in the coffee shop crying. I understood completely. I spent quite a few days unable to talk about it, and I still dread the emails and the forms that come home.

Anyway, yes, to the Sisterhood! It's a rocky road and we need all the company we can get. At least I do.

Hi t.e.! Younger daughter actually does qualify for some funding; getting her assistance in school is more problematic. It took 2 years to get her an EA -- mornings only and lately the EA hasn't been turning up due to family crises. She has a daughter on the spectrum too.
I wonder how big a Sisterhood sub-club of GBB fans would be? Probably quite large, and Marie seems to have a particularly strong Canadian following....

Hey, can I join the bad mother club? Mine aren't old enough to do science projects yet but we did have to do the 100 days project for Kindergarten and I pretty much failed miserably there I realized when I saw all the other kids' projects. I am well on my way to bad motherhood!