It's been almost three months since I decided to resurrect Spotify at the behest of elder daughter.

It's been interesting. I get two weekly playlists: one called "Discover", which are tracks that are not necessarily new, but Spotify thinks might be new to me; and "Radar Release", which includes newly released tracks by artists in whom I've shown an interest, either by "liking" songs, or "following" the artist, in social-media-speak.

I try to listen to both playlists, because the whole point of the exercise is my desire to expand my listening, but it's a helluva lot of music, and I don't always get through it all, especially since I am also sent six (6!) playlists each day, comprised of stuff I've "liked", or even just listened to. Each playlist is based on four to six artists, so that it is sort of themed, roughly, in my case to alternative rock, folk, with some innings into glam rock, and singer/songwriter stuff. It is, of course, my favourite music, on the whole, but some of it is quite repetitive, and the "new" stuff I'm sent is slightly skewed towards country music. Not surprising, I suppose, given that I like folk, and folk and country often tend to lean into each other.

That's algorithm for ya.

Today, however, I got something different. One of my playlists was entirely given over to an Early Music/choral/Mozart/ mix. Fifty tracks of lutes, madrigals, requiems, and the occasional pop song reworked in acapella. Tallis Scholars, King Singers, Oxford Camerata, Bryn Terfel, and, of course, Baltimore Consort.

Like a greedy kid in an ice cream parlour, I downed it all at one sitting.

Heaven knows what this will do to the algorithm. I'd better listen to the Stone Roses-based playlist tomorrow.
Wailed by Persephone at 1/28/2020 10:28:00 pm No comments:

What happened? read the text from younger daughter, who had just holed up in her bedroom for the late afternoon. You said 'Oh My God!'

Younger daughter was a few yards away, but also on the autism spectrum, so in some aspects, miles away. So I texted back:
I've just found out something interesting and exciting that happened in our family 170 years ago!!!

Ah. Not so easy to put in a few words.

Some fella, who shares something like 22 centiMorgans of DNA, was asking me for information some weeks ago. I make it a point to not respond until my ducks are in a row, as it were. Each inquiry is an excellent excuse to update a given timeline. This one is a timeline I haven't worked on in a while.

The case pits them against the Whitbread Brewery, a powerful adversary. I'm probably going to have to search out more newspaper articles to try to determine the true end of the matter (which, I suspect, wasn't good).

Too much for a text. I simply called to younger daughter that it was a story about her great-great-great-great-grandfathers. She wasn't nearly as excited as I was, for some reason.

I think it's very funny.

It's true; we all remember a teacher that was something like this.

With our names upon a star

This rather lovely song turned up on my Spotify "Release Radar" last week.

Looking at the singer, I thought he looked somewhat familiar. It turns out he's Marc Almond. Nearly 40 years ago, he had a hit with a cover of "Tainted Love", originally recorded by Gloria Jones in 1964, and whose version I rather prefer.

As is my habit when world headlines get positively terrifying, I am burying myself in art.

It's not always stress-free.

This week, younger daughter and I are back at water-colour classes. We're labouring at a still-life of drooping blossoms, cut crystal, teapot, jug, and a cup of tea.

Younger daughter creates her own bold and beautiful vision. She's a natural. 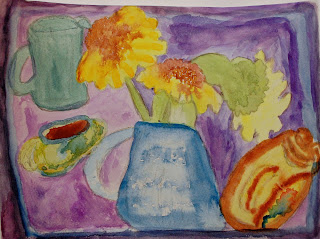 Our teacher gazes at what I've wrought.
"I honestly really like it," she says. "Now, don't take this the wrong way..."
I sit back and raise a dignified eyebrow. I'm a grown-up.
She continues: "I had a favourite student at the art gallery. Just love her stuff. She had vision problems, and kept switching between her glasses. I think that's how she came up with the unique look of her pictures."

So, perhaps impressionism is the way to go.
At least, I can claim this is intentional.
I'm thinking of calling this "Twinkle, twinkle little bat", because it's rather like a tea-tray in the sky. 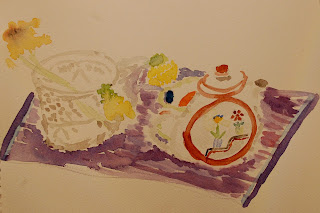 One of the few (very few) things I miss about Hades is the opportunity to view the Academy-nominated short films, live or animated. The following is a nominated animated short from 2017 that I missed. It's deceptively simple, and devastating.
Wailed by Persephone at 1/23/2020 08:23:00 pm No comments:

If you can speak German, don't watch this

I woke up this morning to the news that Terry Jones was gone. While not my preferred Python (that would be Michael Palin), Terry Jones was vital member of the team sometimes referred to as "The Beatles of Comedy" - Monty Python's Flying Circus, so called - I understand - because there is no such person as Monty Python; it isn't a circus; and it doesn't fly.

In addition to writing and acting in the television series and on the albums (where he can be recognized by his inability to pronounce the letter "r"), Jones directed three of the four Python movies: Monty Python and the Holy Grail (with Terry Gillam), The Life of Brian, and The Meaning of Life. He also wrote books and articles, and directed non-Python projects. In fact, it was a BBC series about the Middle Ages, written and hosted by him, that got us in trouble a couple of years ago with our upstairs neighbour. (The show was uncaptioned, so I was playing it too loud after 11 pm; the building manager said it was a first.)

The following is probably one of best-known Python sketches penned by Jones. It doesn't smell of elderberries, and is perfectly safe to watch.

Unless you speak German.

So if you've lost your mind or you hate your children....

So thank goodness Randy Rainbow is at it again, because this has been a particularly bad year for news --- so far.

Younger daughter really loved this. Except for the swearing.

Random categories: Beauty and the Beast. parody, Gaston if you haven't cottoned on, Randy Rainbow, satire

Hung out to dry 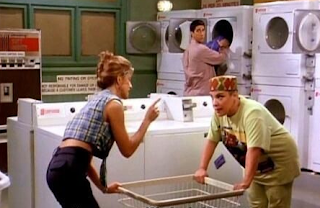 Do you know how today is supposed to be Blue Monday? (Experts don't think it is, by the way.)

It actually started over the Christmas holidays.

One of the requirements we gave to our realtor when searching for a condo last spring was an in-suite laundry.  The apartment had one laundry room with two washers and two dryers, shared by 35 units.  In addition, it was expensive: $2.50 for a washing load (more if you wanted warm or hot water); $2.25 for an hour's drying - 25¢ for each additional eight minutes.

After a couple of decades of my own machines, working out how not to piss people off was a challenge.  They certainly pissed me off: students who stuffed everything into the machines together -- cushions, duvets, underwear -- and people who failed to clear out the machine, but were enraged if you cleared their stuff out in desperation.

The siren call of "home" when I first saw this condo loosened my resolve. The laundry rooms were an odd set-up: three tiny laundry-rooms with a washer and dryer each, on the third, fourth, and fifth floors. (We're on the second floor.) Fifty cents per use, so a dollar for one load.

The machines are older, and don't show how much time is remaining, so I leave a post-it note saying when I turned the machine on.

I've been hoping to start a trend. Nuthin' doing, but I found the sharing civil enough.

Until three or four weeks ago, when, on two occasions, I found an unoccupied laundry room, put in my laundry, set the timer on my phone to return promptly, left a note saying when I'd started the washer ----- and returned to find someone had poached the dryer while my clothes were in the washing machine. I thought this was a thoughtless and unneighbourly thing to do, and left another post-it note saying so, before searching the building for a free dryer. (And no, I didn't poach it from another user.)

In the month that has passed, I felt I had got over my indignation, and no more poaching seemed to occur. To me, anyway.

Yesterday, I decided to put a load of towels in. I only dare do the towels every two or three weeks, but it had been a few weeks since the last contretemps, so I was feeling brave. On the fourth floor, where the best dryer is, the dryer was in use, but warm to the touch, which usually means it's getting toward the end of the set time, which is one hour. The washer takes a half hour, and when I returned, the dryer was still. It was full of towels. I carefully draped these -- about five bathsheets and half a dozen smaller sizes, over the rack, carefully separating one not-quite-dry towel to a separate rung, so it wouldn't dampen the dry items, and would have a better chance to air out. I put my towels into the dryer, started the machine, and left my usual post-it note, noting the time and date.

The Resident Fan Boy, back from a voice lesson with younger daughter, accompanied me for the "half-hour check", where we remove dry items so the rest has a fighting chance. To our horror, there was another post-it note beside mine, scrawled with large and angry writing. I had apparently used the two quarters left in the coin-cradle by the previous user, who had intended to run the towels through a second cycle, and thought leaving the coins would be a clear signal of his/her intentions.

H/she hadn't reckoned with my mind. I had been surprised, when I had gone to put my money in, to find 50¢ already there, but figured, knowing myself, that I had put them in place without knowing.

NOT VERY FRIENDLY!! bellowed the post-it note. The towels I'd draped over the rack were gone.

I grabbed another post-it note and scribbled: "Absolutely unintentional! I'm sorry! I've left two quarters -- if you come back!" And thought to myself: Really? Leaving two quarters in the slots holds your place? Really? Using two hour-long drying cycles when someone else is in the queue?

I didn't write that, of course. It would use too many post-it notes, aside from enraging whoever-this-is further.

Both the RFB and elder daughter are sure the interloper is the same person whom I admonished by post-it note at Christmas.

I rather hope they're right. These are three incidents, and I hate the idea of three households waiting to ambush me with baseball bats, but that's a little extreme.

Another day when I've simply run out of time. It's been an encouraging and discouraging day -- and I may elaborate later.

One of the things I'm working on is a rundown of the "tens decade", which is private, I should hastily add; I won't be posting it here.