I am not a camera 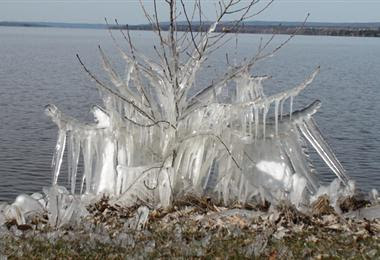 I've got to start carrying a camera again, thought I, as I leaned back in the rickety metal chair outside Planet Coffee in the Byward Market. Directly above, the blue sky was criss-crossed with spindly branches, some twigs gleaming in the afternoon sun.

I used to lug my Nikon everywhere, but I seem to feel so weighed down these days. I could pocket younger daughter's Lumix. We bought it for her a few years back, hoping she could capture images for when words fail her (which is often), but she mainly used it to photograph tiny details in her bedroom: the corner of a doll's face, a piece of a page in her favourite book, her own fingers. She seems to have lost interest now.

I haven't lost interest in photography, but, like writing, I need a spur now and again. Earlier this week, I again wished I had a camera as my Transitway bus whizzed down the Ottawa River Parkway. There are quicker ways to get to younger daughter's school, but if the bus windows are not too muddy and if I can get a seat on the right-hand side, I can gaze out on the Ottawa River. I have discovered over the years that the water is never the same colour. In winter, it can be white, ivory, pewter, silver, gun-metal gray or black. In spring it ranges from sage green, to bronze, to sable brown. Summertime brings every shade of blue: cerulean, cobalt, teal, ultramarine, and nearly everything between. In the autumn, surrounding trees will add dashes of red, orange, and yellow. 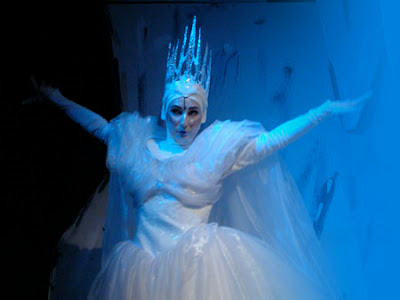 This week, Hades was hit with seasonal temperatures after a week of what would pass for high summer temperatures in Victoria. As a result, as we hurtled by the water (rather an ash gray, spattered with sparkles on a brisk but sunny afternoon), I saw something I haven't seen during nearly a decade of river-watching: a kind of fence of gleaming ice spikes. It looked something like a row of Snow Queen crowns and from the road, made a long continuum of flashing silver undulations of sharpness. I probably couldn't have captured it even if I'd had a camera handy, though I would have liked to have tried. Those who did were down by the shore, like Stephen MacIntyre, who took the below image and posted it at Flckr. 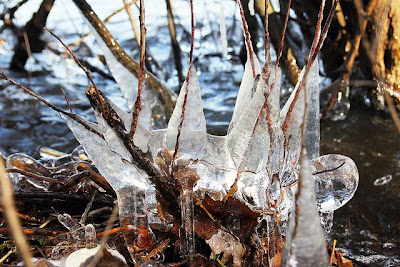