Last September, we had an orgy of 9/11 retrospectives, rather like a bleak sort of holiday celebrating the vaporization of three thousand people. We have now reached the end of a week-long festival of Titanic remembrances, a loving itemization of the freezing/crushing/drowning/imploding of 1500 people in 1912. There was a parade in Halifax (where many of the recovered bodies were buried); the newspapers have had series of articles on the disaster, and of course, as with 9/11, we've been treated to a week of Titanic documentaries and movies. The Turner Classic Movie Channel showed The Unsinkable Molly Brown and A Night to Remember (which features one of my indirect links to the Titanic). The fellow responsible for Downton Abbey has come up with his take on the sinking, four episodes shown repeatedly. (I've only managed to watch bits before wanting to hurl stuff at the TV.) The History Channel and The National Geographic Channel have had a field-week.

Predictably, those that aren't interested were crying "Enough!" within a couple of days, but I've been, while not exactly a "Titaniac", a follower of things to do with the big ship since I was ten, so I've been having rather a lovely time. Or does that sound morbid and inappropriate?

One intriguing aspect of having so many television presentations on one topic is the opportunity to compare. We have the really high-end specials involving mind-boggling computer graphics. They have remarkably similar titles: Titanic: Case Closed; Titanic: The Final Word and Titanic 100: Mystery Solved. While all three are engaging documentaries, brimming with well-known experts and high production values, as a family researcher, I'm leery of titles indicating completeness. History is never finished. 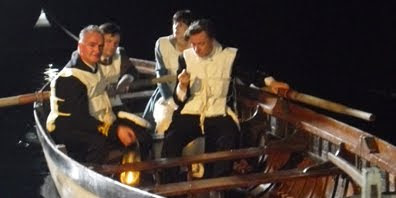 A bit farther down the scale are those news specials and TV series suffering from limited time and funds. Real Stories: The Real Titanic, for example, has its heart in the right place, stating (quite rightly) that what really happened was many times more dramatic and tragic than in films made about the disaster. Unfortunately, Real Stories's budget did not allow the hiring of real actors --- nor the purchase of nail polish remover. We're treated to a long shots of "re-enactors" chatting on deck (looking remarkably unmoved), or in impossibly small row-boats (most of the Titanic lifeboats had a seating capacity of between 40 to 60 people). Most distracting and improbable is a scene where a First Class passenger with pearls, a shoulder-length hair-do and blood-red nails pretends to rub invisible cream into her face.

Aside from the more expensive, less-hastily-made shows, few have been able to resist the basic Titanic myths:
1) She was out to break a speed record. No, Cunard was after the speed records; White Star was going for the comfort angle. She was going too fast for seas laced with ice-bergs, but that was due more than the crew being unaware of the true danger.
2) She had been marketed as "unsinkable". The "u" word only appeared in an engineering article which described her as "practically unsinkable". Any public perception of the Titanic being indestructible came from word-of-mouth, not from advertising.
3) The ship's band went down playing "Nearer My God to Thee".  Oh for Pete's sake. Take a look, if you will, at very similar scenes from the two most famous movies about the Titanic: 1997's Titanic and 1958's A Night to Remember.

Go ahead, I'll wait: Notice something? There are two completely different tunes. "Bethany" is the setting most familiar to North Americans, while the usual Church of England setting, familiar to most Brits, is "Horbury". Furthermore, Wallace Hartley the band leader, was a Methodist and was said to prefer another setting called "Propier Deo". Walter Lord, the author of the book A Night to Remember, wrote a follow-up in 1986 entitled The Night Lives On (because history is never finished). If you want to read the full argument, someone has thoughtfully posted the chapter and some bonus illustrations online. (Incidentally, the article mentions "Mrs A.A. Dick of Calgary" who happened to be an acquaintance of my late mother-in-law, so there's another of my admittedly very indirect connections to the Titanic.)

I listened online to BBC Four's The Titanic Minute by Minute which depended heavily on Lord's original book for research and claimed to be an accurate timeline of the sinking. It was a tribute to the Titanic's noble and dutiful musicians, and also featured nifty numbers from the likes of Billy Bragg and Kate Rusbury. I quite enjoyed it until BBC Four, as so many others, could not resist the pull of the legend. They played "Nearer My God to Thee", in the Bethany setting, yet! I actually screamed abuse at the computer, much frightening the dog.