They had us until the fish 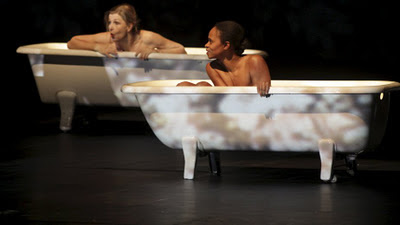 I wasn't sure if it was hair dye or a forest green fascinator.

There I was, passing the minutes before the ballet, training my bird binoculars on the audience below. If you're in the loges at the National Arts centre, it's always fun to do a crowd comparison. The kind of audience that shows up for a symphony concert (reserved and dressy) versus those coming to see a musical (mixture of jeans and flamboyance) versus the Vinyl Cafe aficionados (pullovers). The ballet brings out a distinctive crowd. Oh, you have the usual bun-heads, those humourless and skinny young girls accompanied by their equally skinny and usually blond mothers, but you see some pretty unusual garb in the ladies room, and some head-turning male fashions as well.

You can also pick out the boyfriends and husbands who came along; some sons too, I noted as I scanned the first row where you usually see the more rabid balletomanes. Someone had brought two preteen boys, decked out in plaid baggy shirts. They were in full slump, propping their sneakered feet on the edge of the stage.
"I'll bet their parents are francophone," I muttered to the Resident Fan Boy (who, to confuse other ballet-goers, turns up at performances in a pullover). Anglophone families, in our experience, don't bring their sons to watch dance.

Directly below our loge, I could see a rather ungainly girl taking her seat in the front row. Well, I could see the top of her head anyway, and the front part of her head looked forest-green and feathery. I watched her with interest as I tried to decide, peering through my binoculars, whether she'd dyed half her head, or was wearing those fascinators that young Royals seem to think are nifty. She appeared to be clad in a rather shapeless dress with short sleeves and as she fidgeted with a sheer scarf which she kept smoothing out over her knees, I noticed she was wearing over-sized beige gloves. Well, I thought. It's for a Pina Bausch, after all.

We included this performance of Danzon in our subscription because I recognized the name. It turns out that these two Ottawa performances by Tanztheater Wuppertal were the only Canadian ones on this tour, and we had something of a hot ticket. I've seen bits and pieces of Pina Bausch works on television, so I was prepared for quite a bit of surrealism. 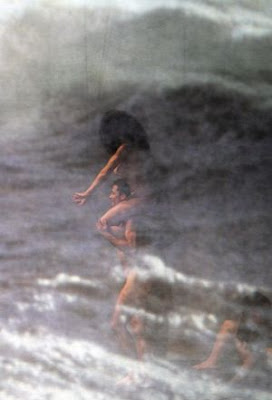 No disappointments there. We started with two women in white shifts struggling on their backs like overturned beetles while a man in an large diaper rolled stones at them, then, like a child, experimented with pinning them down with the rocks. Then a lady in an elegant swirly summer dress strolled across the stage ("I am here and you are there!") and plucked someone from the audience to share the view. It was, of course, the fascinator-lady I'd been studying earlier, and she turned out to be a man and clearly a member of the troupe.

Things got weirder from there. It was rather relaxing, as I learned long ago not to labour on attaching meaning to modern dance performances. It usually emerges on its own, and if not, so what? We saw naked women in bathtubs being slowly removed, one by one, by a blindfolded man. Couples literally rolled in the hay. A cross-dresser in an evening gown and full-blown Bette Davis mode, drawled through a meandering monologue. Tents were set up and campers listened to excerpts of Bambi and long jokes, roaring with laughter. Nude people behind a translucent screen showing flowers and crashing surf, chased each other, piggy-backed each other, and appeared to frolic in the waves. (The Resident Fan Boy told me later that younger daughter shielded her face behind her programme during that bit, but as you can see from the photo, we couldn't see much. I bet those preteen boys in the front row were straining their eyes.)

It was, as elder daughter might say, random, but in this small company with a pleasing family mix of young and old dancers, it felt as we were getting to know each individual character.

Then, out of nowhere, we were confronted with a large screen featuring close-ups of schools of various tropical fish. In front, a very young man in black, whom we'd not seen before, stood and fluttered his hands. This seemed to go on for a good ten minutes. That's the first time during the evening that I found myself trying to see my watch in the darkness. The other dancers returned and did various odd things with dirt, but it felt as if the spell had been broken.

At the end, the company came out for their curtain calls to rapturous applause. (The preteen boys in the front row were in a non-clapping slump.) The dancers clung to each other in a long line, with the young man who had been fluttering with the fish looking closed down and rather out-of-place.

As we descended from the upper levels to find the exit, the Resident Fan Boy commented: "I was fine until the fish." I giggled. I had been thinking almost the exact same thing. Younger daughter, however, declared she had liked the part with the fish, especially the one which reminded her of Dorey from Finding Nemo. So I guess it was a win-win, seeing as we had enjoyed the rest of the performance.

It being the one Canadian venue of the tour, there were detailed reviews from both the Ottawa Citizen and The Globe and Mail, both reviewers singling out the moving tribute to the late Pina Bausch. Apparently, she had choreographed the fish solo for herself.

I guess, then, if you were "in the know", that would be your reward. I think, though, that being unknowing isn't always a bad thing when watching dance. I'm certainly glad we didn't miss this.
Wailed by Persephone at 11/30/2011 08:06:00 pm No comments: