So what do you do when the world seems to be going a little nuts? Or at least a little more nuts than usual. We woke up to a pall of smoke over Hades, from forests fires around Le Tuque, Québec. That's about 200 miles away. People actually called firefighters in Ottawa to investigate where the smoke was coming from. Nuthin' on the news about it, because CBC was going on about the economy (better) and British Petroleum in the Gulf of Mexico (catastrophic). Then Israel killed some people on boats bringing relief supplies to the Gaza. (Apparently they now "regret" this.)

Furthermore, we just learned of a family crisis concerning a close friend in Victoria, and a scary health and safety crisis affecting one of elder daughter's pals. The latter appears to want no action taken. But he might die. Oh...Crud...

While I'm mulling over moral consequences, I need mood music. How about the late great Warren Zevon? Here's "Lawyers Guns and Money" (which about covers it) performed by Zevon's son Jordan and Bob Dylan's son Jacob:
Wailed by Persephone at 5/31/2010 03:16:00 pm 3 comments: 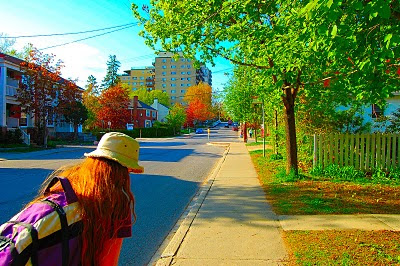 Spring is a fleeting thing in Hades. Generally, it has flown by the Victoria Day weekend (which was last weekend), if anyone has actually noticed that it was here in the first place. Garden centres in The Nation's Capital have been known to openly admonish eager and deluded gardeners who attempt to plant their annuals before May 24th.

This year was an excellent illustration of the folly in not waiting; we've been on a roller-coaster of wildly fluctuating temperatures since March, veering from summer-like heat to a sudden killing frost overnight, then back again. What has been truly weird about the season is that I cannot remember, during my last nine springs here, a time when daffodils, tulips, and lilacs have been blooming at the same time. Generally, the daffs show up in late April/early May, give way to the tulips which are gone by the time the lilacs burst forth with heady fragance in late May to early June. It's late May. The lilacs are nearly gone, having climaxed with the last of the tulips two weeks ago.

Even a "normal" Hades spring reminds me of the Sunbane from the relentlessly bleak trilogy of trilogies written by Stephan R. Donaldson. I vaguely remember making it about halfway through the second trilogy, but there's only so much leprosy, blood-letting and self-loathing one can stomach and I'm really not that much of a fantasy fiction fan. However, the passages describing the unnatural Sunbane spring, with trees being forced into leaf in paroxysms of green agony, stayed with me. I'm reminded of them each time spring comes to Ottawa, and the buds suddenly erupt from the long-barren branches, then hemorrhage into full leaf, usually within the space of a few days. Listen...are the maples screaming?
Wailed by Persephone at 5/30/2010 12:11:00 pm 4 comments:

You could say I have a history with Hansel and Gretel.

When I was a very little girl, I fell in love with an "operatic fantasy" version of the Humperdinck opera Hänsel und Gretel. It featured stop-motion animation and a hilarious/scary camp version of The Witch by the rather delightful Anna Russell:

In Grade Four, my teacher decided to put on Hansel and Gretel for the school. I was chosen as the witch --- unanimously...

When the gates of Parenthood slammed behind me, I found myself back in the land of fairy-tales, but it was a double-edged sword, to clumsily mix a metaphor. You have started a family and you become aware of the darkness behind the stories which, let's face it, never were for children in the first place. Hansel and Gretel is particularly dire. Innocents are abandoned and lost in the dark forest, left to the mercy of predators. Parents know that the world is teeming with those who would consume children. My kids, untouched by such knowledge, loved Hansel and Gretel, just as I had.

So this morning, we set off for the Canadian War Museum which has been the site of the Ottawa International Children's Festival for the past couple of years. Last year, to avoid the horrors of so-called "quality testing" at younger daughter's school, I took her to the festival and one of the fabulous shows we saw had been a production of Theatre Gruppe 38. This year Gruppe 38 was putting on Hansel and Gretel, so how could we resist?

After last year's excruciatingly uncomfortable risers, I was thrilled to enter the theatre and encounter proper seats. Furthermore we were ushered into the front row while a woman dressed in a white flowing garment cradled what appeared to be a baby and crooned a lullaby, pausing every now and then to instruct the usher to re-seat the audience closer to the stage, in that firm, rather disconcerting Danish way. (I've encountered several Danes in my life. They have all been firm and rather disconcerting.)

She was joined by a pianist who, when not playing exquisitely, combed his bald head and popped marshmallows in his mouth. She spread out her garment, revealing that there was no baby in her arms and began the story, pausing like a school-teacher while some late arrivals scurried to their seats. She had a shock of short white hair, unlike the actress in the photograph, and reminded me somehow of the lead singer of Roxette, only older and less made-up. She told the ancient story as if off the top of her head, slight oddities in vocabulary and grammar being the only giveaway that English was not her first language. (Scandinavians, well, indeed most Europeans, put us to shame in the language acquisition department.)

Every now and then, she would select a long fold of her garment, spread it, and an undulating picture would be projected onto it: a balloon, a bird, angels, a ringed planet. The pianist would occasionally interrupt her narrative with a question, comment, or a boyish grin. Then he'd pop another marshmallow into his mouth. The narrator explained that the father didn't want to lose his children in the forest, but that having given into his wife for the first attempt, he had to give in for the second.

"Why?" asked the accompanist simply. She paused, smiled at him, and did not answer.

When she became the witch, she stood on a grate that emitted orange light and a billowing breeze. Her gentle face became hard and her accent became....German, as she spoke about how Gretel must "vork" as Hansel is caged and fattened up for the...oven... I half expected her to say: "Vork vill make you free..." When the witch ends up in her own oven, the orange beam lit her from below and the air rushing through the grate whipped up the folds of her garments like flames.