I had trouble getting to sleep Wednesday night. For once, it wasn't because I was being attacked by gremlins. It was because I spent the evening watching a play being live-streamed to a cinema, and it was so good that I had to spend a couple of hours trying to calm myself down.

Last night, the Resident Fan Boy, younger daughter, and I were at a Cineplex theatre for a "live" performance (delayed about five hours for our time zone) of The Royal Shakespeare Company's latest production of Richard II.

What made it so exciting? Well, for one thing, we were seeing it mere hours after the audience lucky enough to be physically present in the Royal Shakespeare Theatre in Stratford-upon-Avon. In fact, we may have had a very good look at you if the cameras aimed where you were sitting before the performance began. (It looked like a younger and prettier crowd than I'm used to seeing at a play, but that's probably why the cameramen focused on them. Cameramen are incorrigible.) 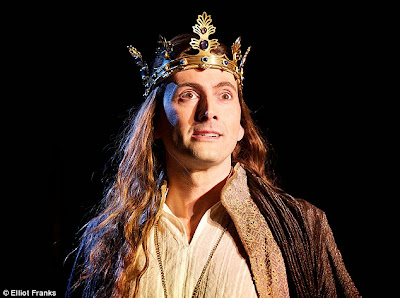 For another thing -- and yes, I'll admit this is the reason I booked the tickets practically the second they became available online -- the cast was led by David Tennant. However, it should be stressed that this was not physical excitement. This time. You'd have to be heavily into androgyny to get hot and bothered by this Richard. When intermission began, I turned to younger daughter and remarked: "David Tennant has been to a brow bar!" She laughed heartily because we've been taking her to a brow bar since last summer because trying to pluck hairs when one is autistic is something best avoided. (Also, I feel compelled to ask:  Was there such a thing as gold nail varnish in 1397?)

This is the first time the RSC has attempted a live-stream-to-cinema event, and they're clearly following the lead of the National Theatre who has been doing successful broadcasts for a few years now, to the benefit of those of us who dwell in Hades and find flying to London to see shows beyond our purses. RSC is still a bit on the learning curve here.  The opening interview between the presenter and director Greg Doran was barely audible against the chatting audience.  National Theatre has evidently worked out better miking procedures.  At the interval, the interviews were held back stage with hand-held mikes, and we were able to fully enjoy hearing the views of Michael Pennington who had delivered the devastating "this sceptred isle" speech as the dying John of Gaunt, and Jane Lapoitaire who, I was astounded to learn, is returning to the stage after a brain injury caused by a stroke in 2000. (Anyone seeing her performance would be floored, aneurysm or not.)

I was a little worried when the play began.  The music was ethereal, the scenery misty and deep, but the voices echoed disconcertingly, a problem I'd never noticed with the National Theatre live-streams.  Nigel Lindsay as Bolingbroke, and his fellow warriors, boomed loud and clear, but Tennant's effete and coy Richard was, at first, a strain to hear.  Later, I either became used to the acoustics, or the technical hiccups were smoothed over.  Also, as Richard made the transition from entitled preener to resigned and doomed loser, his register dropped and his delivery slowed.

Tennant may be the big draw for this production (and an effective one too), but a Royal Shakespeare Company production is, almost by definition, an ensemble piece with no weakest link. It's difficult to single out performances, but darn it, I have adored Oliver Ford Davies since his impeccable jewel of a performance in Ang Lee's film of Sense and Sensibility.  He gave us an irascible Duke of York and, along with Marty Cruikshank as his duchess, and Oliver Rix as his son Aumerle, brought a welcome touch of madcap farce as the dysfunctional York family takes turns pounding on Bolinbroke's door with conflicting suits.

We were also treated to a thankfully limited show of bodily fluids, from the sound of Mowbray's spit (spat contemptuously  by Anthony Byrne) hitting the floor,  to the Duchess of Gloucester's streaming nose (dripped in passionate grief by Jane Lapoitaire). This is not an objection; these things added to the visceral nature -- not to mention the vicosity -- of what was going on.

I was grateful that I had recently seen Rupert Goold's television version of Richard II, as it's been some years since I read the play, and this version makes me want to see that version again.  Younger daughter found the play long, although she clearly enjoyed seeing Tennant, but the Resident Fan Boy and I were entranced, and left the cinema energized.

Understandably, the RSC plans more live-streams, and some encore presentations of this production.  I don't know if they will play here; our venue was almost full, but not sold out. If you missed it the first time and the opportunity arises, grab it and go.  Along with top-notch stage craft, you will get a glimpse into how the production was put together, including the extraordinary use of long chains of reflecting beads.  In the meantime, you can watch the production diaries or look at the Richard II blog online.