Leaves much to be desired 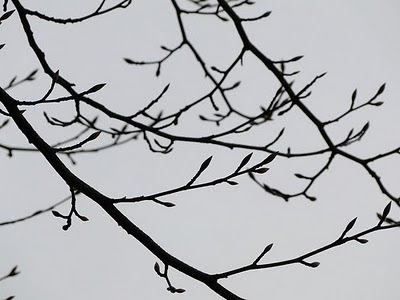 (photo by Emmeline Greenall, who calls herself "Flickerfairy" at Flckr)

There were men in orange reflective vests and hard hats clambering in the high branches of the tree which overhangs our neighbour's backyard. The local dogs were going crazy. I watched as they made pulleys with ropes, attaching them to large branches. One of them, saddled on a pulley tethered to an even sturdier branch, straddled a limb and pulled up a small chainsaw dangling from his belt. After he sliced through, his partners lowered the severed bit on the pulley, as he scrambled to another part of the tree. He must have had the best view in the neighbourhood.

Huge, bristly bits of tree were dragged protesting to a nearby wood chipper. I noted sadly that they were covered with silver leaf buds shining in the disc of the sun barely making it through the cloud cover. Leaves never to be.

When the men drove off, the tree had gone. They had completely dismantled it. I'm sure there were excellent reasons to do so, but I think we'll miss that bit of the canopy this summer.

So far this year, I've managed one post per month, a new low. Time to kick myself in the pants. Barring a computer mishap (they tend to happen about this time of year), I begin another NaBloPoMo tomorrow, April fool that I am.
Wailed by Persephone at 3/31/2011 03:20:00 pm No comments: