First time in a window seat in twenty years 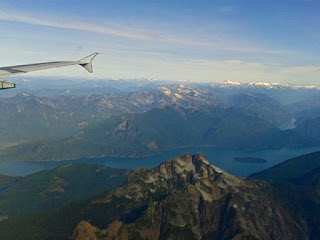 The Fraser River is turquoise near Hope, British Columbia, turning brown quite suddenly as it approaches Abbotsford and the delta near Vancouver.  The mountains are sharp, or mounded with a round dimple of water on the top. There is snow, but not much of it in this warming world.

As the plane swoops down over the eastern end of Vancouver, I squint and peer, trying to catch that moment when we are low enough to make out actual human beings below.  I never manage to spot pedestrians, but I see bicycles twinkling in the morning sun along the edges of the roads.

I transfer to a much smaller Air Jazz plane and am surrounded by British Columbians, distinguishable from Ontarians by their easy chattiness and loose, layered clothes.  It's a seventeen-minute flight to Victoria, so the wheels drop down while the plane is still suspended above Georgia Strait.  The ocean changes from the muddy tone flowing out from the mouth of the Fraser River to the green of the shallows to the indigo of the deep water near Vancouver Island.

The sea looks ridged and wrinkled from this high up, the surface only slightly scratched by sailboats, motorboats, ferries, and industrial barges.

Once again, Persephone returns for a brief summer, and for the first time, not in the company of her younger daughter.  (That's why she has a window seat.)
Wailed by Persephone at 7/31/2015 05:23:00 pm No comments: