Not my furry child

. . . The morning came, and left
The sunlight on my step like any normal
Tradesman . . . . - Christopher Fry, The Lady's Not For Burning

It wasn't how we expected the day to end. Oh perhaps, with twenty/twenty hindsight, the signs were there, but they weren't apparent that sunny Monday morning. The Resident Fan Boy had taken time off work because Demeter was arriving from Victoria that day, in preparation for a 26-hour train trip out to Halifax with younger daughter to spend Canadian Thanksgiving with older daughter.

We'd booked a place at our local animal hospital for our cat, who has stayed there before. I was getting a little nervous though, because she hadn't been eating over the weekend and had spent the better part of the previous week sleeping even more than usual. Not unduly alarmed, I phoned the vet and managed to get an appointment for midday, so we accompanied younger daughter on the hour-long bus ride to her school and returned for some last minute guest-room cleaning before slipping the cat into the soft carrier for the ten-minute stroll to the clinic.

The vet is new to the practice, but knows our cat from recent stays and inoculations, calmly noting the difference in her. Until she looked into the ears.

"Oh, now, that's not good news," she said, before assuring us that most pet-owners don't pick up on jaundice, although in the natural daylight of the examining room, we wondered how we could have missed it. We agreed she would be admitted and signed the paperwork for more tests before heading home to await the results. But by then, I had a pretty good idea of what was coming.

It came a matter of minutes before we were due to board the bus to retrieve younger daughter from school. I listened briefly to the blur of descriptions of possible medical interventions, but recognized the kindly hesitant tone, so I asked my standard question: "If it were your pet, what would you recommend?"

A quick conference with the Resident Fan Boy during which we agreed he'd fetch younger daughter. A hasty farewell at the door. I did a quick round of the house, stashing a wad of tissues in my pocket and donning the twenty-first century equivalent of a black armband, a pair of sunglasses, before retracing my steps back to the animal hospital on this sunny early October afternoon.

It's clear they have this down to a fine art. The worst bit is signing the papers and paying the bill which, obviously, must be done beforehand. Then they ask you if you want some time alone. I didn't know, never having done this before. (I've had pets euthanized, but that was a long time ago before they let the owners stay.) So I said 'yes', and they brought her in wrapped in a crimson felt blanket. She looked calm, but bewildered. That may have been partially due to the fact that I was dripping tears on her head, despite my best efforts to be a solid comforting presence. As I stroked her and spoke to her, I noticed the bandage on her leg which held the cannula ready to take the injection. I scratched her gently under her chin and behind her ears for one last time, then went to the door and gave a quick nod to the assistant.

It's an odd thing, cradling and crooning to a live animal, then the realization that life has left the body. I've only been present at two human deaths, during the time I volunteered at the hospice in Victoria, and in both cases, there was no dramatic clear-cut moment between being and not being. The vet checked with her stethoscope and told me she was gone, and I could see as I stepped back, by the splayed white paws, that this was true. I left quickly after a swift hug from the vet, sunglasses in place so I wouldn't upset the owners with living animals in the waiting room.

When my elder daughter was three, she kept requesting a "moving cat" and we realized with sinking hearts that she meant a real one. My mother never could deny anything to her beloved granddaughter, so when my younger daughter was one, off went five-year-old elder daughter with her grandmother to the SPCA. It was time, thirteen years later, to break the news to my now eighteen-year-old at her university in Halifax. I tried to do it in gentle stages by text message. She apparently staggered back to her dorm and laptop where she contacted me by Skype, presaged by the sound of her ragged weeping through my computer speakers.

After the bootless exercise of trying to comfort elder daughter through a computer monitor, it fell to me to break the news to younger daughter as she arrived home from school with the Resident Fan Boy. She retreated to her bedroom and shut the door. I emailed her teacher and printed up several pictures for her to take to class the next day. Then I headed out to the airport on the bus, to tell my mother, who had been airborne when all of this happened.

The most surprising reaction came from the Resident Fan Boy, a dog-person marrying into a cat family. Yet, several times over the next three days, I'd come across him weeping, usually in the kitchen in the morning. "It was our time," he said. I, too, had poignant stabs, still do: when I hear movement on the stairs and think she's coming up, when I look for a black form curled in the laundry basket, when I shift carefully in bed around the ball of warmth between my ankles. Which isn't there. On the whole, though, I felt distanced and peaceful. Is this because I was there for her final minutes, because I saw the limp body on the examining table and knew it was beyond pain and fear? 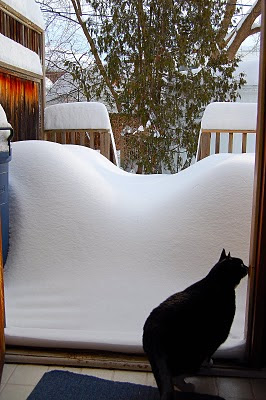 There are people who are a bit dotty about their pets. They buy them clothes and trinkets and call them their "furry children". I beg to differ. Yes, both children and pets deserve love, shelter, exercise, stimulation, and protection. But children are not pets, nor are pets children. I have children. I have never put their food in bowls on the floor before locking them in and going out for a few days while having a neighbour check in on them. I don't have them do their business in a sandbox in the basement. My daughters will, eventually, vote.

There is, however, a cat-shaped hole in our lives. It is a unique shape, the right size for a little black cat with white stockings and garters. It will not be filled, even when we get other pets, who will in turn, leave their own holes. Because loss is the price of love, whether for animal or human. And when the day ends, in the expected or unexpected fashion, love may be indeed all we have left. (Goodbye, Julie.)
Wailed by Persephone at 10/15/2010 02:18:00 pm 5 comments: