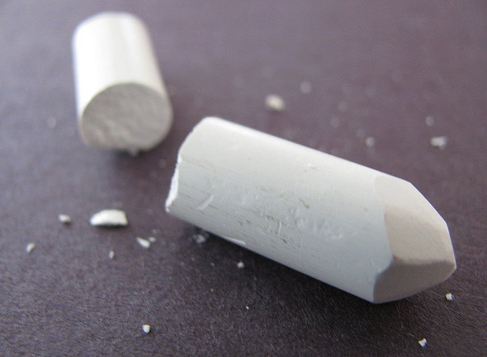 When I was in Grade Five, we had a Welshman called Mr Jones for Math. When you raised your hand, he would query, "What is it, vach?" If your answer was wrong, he would scoff, "No, that's not it, you silly girl!"  Somehow, this was not wounding, couched in his Welsh accent.

In fact, his aura was a happy combination of gentleness and sternness; I don't recall anyone acting out in his classroom.  If you weren't paying attention, he'd pelt you with a piece of chalk, a bit of a shock to his Canadian students.

He also clearly loved math, and a teacher who loves his/her subject has won half the battle. My mother enjoyed hearing tales of Mr Jones.  Growing up in British schools, she'd been pelted with her share of chalk, and she passed along a multiplication trick from my grandfather (another Welshman): If you're stymied when the 11x sequence gets past 9, simply add the two digits of the number to be multiplied and put it in the centre. So, for example, 11x23: 2+3=5, put it between the digits of 2 and 3 that make up "23", and you get 253. Try it with a double digit number times eleven.

Mr Jones was incredulous when I told him, then openly delighted when he found it worked.  It takes a Welshman to astonish another Welshman.

The school year rolled around to spring, and some bright spark came up for the perfect April Fool's trick to play on Mr Jones.  His class was after morning recess, which afforded the opportunity for every one of the thirty students in his class to locate and pocket a piece of chalk. The ringleaders set up a lookout at each door at the end of the cloakroom, then ran to take their places.

The instant Mr Jones appeared, he had to duck out under a hail of chalk.  When he came back in, he was laughing, saying it was the best trick ever played on him.

Our principal, an ex-military man who had us march in PE and addressed us by our last names, was not so pleased.  The next day, two students were appointed to make a public apology at the beginning of math class.  Mr Jones listened politely, in some bewilderment:  "It was a splendid joke," he protested.

My math progress varied widely with the teachers I encountered over the years.  If I had had a teacher like Mr Jones every year, I do think I would have made steady, if unspectacular, progress.
Wailed by Persephone at 4/01/2015 09:43:00 am No comments: