Reasons not to be home

Showings are like your annual physical.  Chances are, you haven't lived as you ought and now someone's going to judge you.

Days after our house went on sale, a recognizable pattern emerged, one I faintly remembered from selling our house in Victoria seventeen years ago:  the stress of continually cleaning and clearing out, while packing and dealing with the ordinary everyday chores that don't go away simply because your life is in upheaval.

Seventeen years ago, I was doing this mostly on my own in Victoria while the Resident Fan Boy was starting his job in Hades, usually getting a few hours' notice before potential buyers showed up, scooping up an eight-year-old and four-year-old and heading out.

These days, I have one young adult daughter on the autistic spectrum and an elderly dog to get out of the house, but the internet means I get at least twelve hours' notice.  The downside is that I can't go downtown or into most shops or restaurants because of the dog.  The weather has been kind.

However, some agents show up early, assuming I'll, of course, be out at work.  This means leaving in a hurry while the prospective buyer waits outside, an awkward situation which sometimes has me struggling to hang on to the precepts of my "angel cards" which happened to include "enlightenment" the day I run into one of the McKenzie brothers on my front walk. 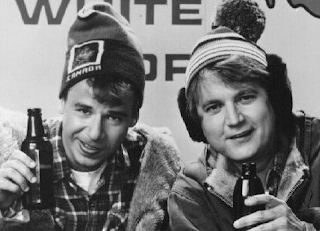 Enlightened people don't think dark and nasty thoughts about such people who have shown up five minutes ahead of the scheduled viewing time, while one attempts to marshal said dog and said daughter, both of whom have already been hustled out earlier in the day by another agent who showed up ten minutes early.

Enlightened people don't think ill of anybody - even a cheerfully loud man who asks questions in the third person while one is standing there, even after one has already answered his question about the roof:  "Beauty!"  (Yes, he really says that.)  "Did they give up their parking in order to have the deck?"

His large, brilliantly white SUV-type truck is squeezed next to the curb, and still taking up much of the lane.  I pass it as I head down to the coffee shop to take up vigil with the dog, sending younger daughter in to buy a drink, while I wonder why on earth such a person is looking for a house in an urban neighbourhood when everything about him screams "Suburbs!!!" 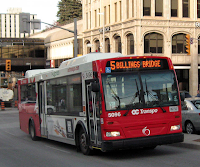 On the seventeenth anniversary of the day we moved into our Hades house, I board the bus on the heels of younger daughter.

During our first year in Hades, André was almost always our driver on the bus that took us to younger daughter's preschool. He always greeted younger daughter by name, and treated all the passengers with calm kindness -- even the ones who were being difficult or silly.

We mourned when his route changed, and younger daughter made him a card. For my part, I wrote to the OC Transpo web site, describing his specialness.

We glimpsed him from time to time, when younger daughter attended kindergarten near Westgate, and later when she was in a special programme in Blackburn Hamlet. (Younger daughter's school career was an immersive course in Ottawa geography, and OC Transpo bus routes.)

Now, I greet André warmly, and he says, "It's been about fifteen years, hasn't it?"

"We saw you in the newspaper!" I exclaim, before hurrying to my seat. André is one of the drivers who mans the emergency buses that act as temporary shelters in big apartment fires, and we had saved the article.

I'm careful to leave the bus by the front door, so younger daughter can say hello. And goodbye.

I tell him we're moving and that we'll always remember him.

Random categories: buses, Ottawa, the kindness of others 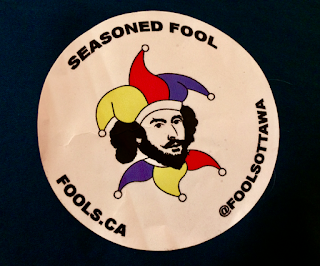 The Fools celebrated their fifteenth anniversary of putting on their loopy, yet spot-on versions of Shakespeare's plays in Ottawa's park. (The actual company has been around quite a bit longer, but you can check the web site yourself.) That means they've done sixteen park productions, of which I've seen nine. I would have seen ten, except for the summer that my escape to Demeter took me out of town for the entire run of As You Like It, which, according to the Resident Fanboy, was superb. Damn.

On my last evening with the Fools, we squeezed our camp chairs next to a tall man sitting in a kitchen chair, effectively blocking the view of those behind him. Three rows ahead, another tall man, arriving minutes before curtain (had there been curtains), lowered himself into his "low-profile" chair, directly in front of another gentleman who had arrived more than half an hour ahead, leaving him little leg-room, and effectively blocking his view as well -- and quite a bit of mine.

I strolled over to the snack-and-souvenir booth and exclaimed: "Diet coke and chips!"

The girl behind the table intoned with me, in exact, unplanned synchronization: "Luxury!!"

Another volunteer asked me if I'd seen a Fools play before, and after she'd heard my catalogue, offered me a "Seasoned Fools" sticker which I wore proudly, as I returned to my seat behind the man behind the tall man in the low-profile chair.

It was A Midsummer Night's Dream, one of my favourites, and was, of course, hilarious and charming - what I could see of it.

A few months ago, I made a list of about a dozen things I will miss about Hades. A Company of Fools came third, which isn't all that significant; it was a pretty random list.
Wailed by Persephone at 11/01/2017 01:01:00 pm No comments: