My two favourite things about the Buskers' Festival in Victoria, BC

We heard local singing group The O'Brien Family when we wandered down to Bastion Square earlier this week. They do original songs and covers, such as this one of Sarah McLachlan's "Angel" - a song I don't even care that much about:

We sat on the stone steps leading down to Wharf Street, and stayed so long that when I got up to walk, I had a limp. The family came from Birmingham in 2003 and the kids have grown up making music with their dad. We bought two of their CDs.

Most of the buskers at the festival are very clever people doing very dangerous things in an entertaining manner. Usually much of the allotted forty-five minutes is taken up with amusing patter and a reminder that they need donations to make a living. An exception was the comedy duo Funny Bones which consists of a guy from Manchester and a guy from Japan doing cleverness after cleverness after cleverness. Since much of their act is mime, very little patter was involved. The following promo clip gives only a hint of how different their act is:
If you have a chance to see these guys, do. And be generous. They're not juggling knives; they're juggling wits.
Wailed by Persephone at 7/29/2013 08:56:00 pm 1 comment:

Gotta dash tonight, but before I do, I'd like to give you a little taste of a concert I attended last night. The session-end presentation of "Basses Loaded", a first-come-first-served month-long series of intensive workshops offered by double-bass virtuoso Gary Karr, is, I understand, sold out every year, but Demeter, who has been a Gary Karr fan for at least thirty years, procured tickets for the Resident Fan Boy, younger daughter, two mutual friends, and myself. This video is from a Basses Loaded concert of seven years ago, but this piece was featured, a passionate duet for double basses. 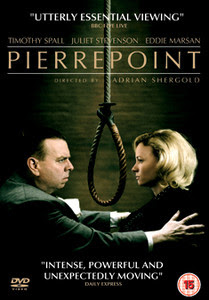 There's an annual Shakespeare Festival in Victoria, played outside on the grounds of Camosun College on summer evenings. This year, the plays are The Merry Wives of Windsor and Measure for Measure. This will be my first viewing of the former, but the latter is an old favourite of mine.

When I was studying literature in university, I tended to pick poetry and drama courses, because there was, on the whole, less reading required, and because audio recordings of some of the poetry and most of the plays on the syllabus were available in the audio library in the university library. The recording of Measure for Measure was a particular delight. In one of my favourite scenes, the waggish Claudio finds himself apprenticed to the prison hangman Abhorson, a humourless fellow who takes his job seriously and declares (in the voice of someone who sounds like he's been gargling with carbolic acid) that his profession is "a mystery": Sir, it is a mystery. I was thinking of Abhorson the other night during my own private film festival.

I should explain. During several of the past twelve summers I've returned to Victoria, I've held a little event for myself which I call "Persephone's Summer Film Festival". Not every summer, y'understand, because this festival requires two things: reasonable proximity to Pic-a-flic, which is simply one of the world's best DVD rental outlets; and access to the means and a place where I can quietly watch film on my own. (Is that three things? Sorry.)

The acquisition of a laptop computer made the second (and third) thing a constant. When I'm ensconced in the basement guest room of Demeter's condominium building (four blocks away from Pic-a-flic), I can indulge in a recently released film each night, with plenty of time to stroll down and return it the next day. However, with one exception, all my summer house-sits have been across the city, sometimes quite far out of the city, so that has me searching through Pic-a-Flic's crammed shelves of so-called "library videos". These are videos which are no longer recent, and you may rent several at a time and keep them for a week. It's another good excuse to visit Demeter.

While poring through the collections for this week's selections, I happened upon something starring Timothy Spall entitled Pierrepoint: The Last Hangman. I was startled, because I could tell the film was relatively recent, about 2005, yet I'd never heard of it. It also appeared to be a co-production with Masterpiece Theater -- yet I had never seen it. Once I got it into my laptop, I understood why.

Strong cast, strong story (although much dramatic licence has been taken). You may also need a strong stomach. This is the story of Albert Pierrepoint who was, in point of fact, not the last hangman in Britain -- apparently the Americans needed a more salient title -- but a grocer who was also a professional executioner, like his father and his uncle before him. As portrayed by Timothy Spall, Pierrepoint is a man who, like Abhorson, takes putting people to death very seriously, earning himself a reputation for speed, efficiency, and humaneness. He achieves this by sticking closely to his principles of how the job is to be done, with a powerful sense of right and wrong. This is not in the sense of what his victims have done to deserve the death penalty; he doesn't necessarily want to know. As far as he is concerned, when he sets out to perform an execution, he is, for the duration of the job, not Albert Pierrepoint but the instrument of the justice system and once the prisoner is dead, they have paid the price and are now innocent. Between 1933 and 1955, he hanged somewhere between 400 and 600 people, including rather a lot of the Nazi war criminals condemned at the Nuremberg Trials and Ruth Ellis, the last woman to be hanged in Britain.

It didn't take long to understand why I had never seen this on Masterpiece Theater. I could say this is an unflinching view of twentieth century British capital punishment, but I flinched quite a bit. We see a good sampling of these hangings and these are shown very realistically. At one point, we see a woman's naked lower body, as Pierrepoint washes her down in preparation for the undertaker, one of the hangman's duties.

However, I think the topic was sensitively handled, although a lot of liberty has been taken with the facts. In order to deliver more drama to the narrative, assumptions have been made about Pierrepoint's relationship with his wife, and when Pierrepoint finds himself having to execute someone he knows (which did happen), the man is portrayed as a close friend when in real life, he was more of an acquaintance. Pierrepoint did write an autobiography which I would now like to read. 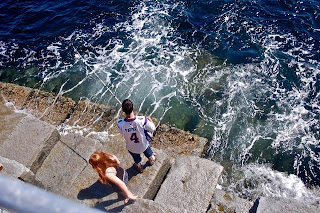 When I was ten or so, my church was in James Bay, an old neighbourhood of Victoria, BC which used to be a bay before it was drained and built up. (When the Big One comes -- the super-earthquake for which we're rather overdue -- James Bay will not be a fortuitous place to be.) One Sunday, they took the R.E. (Religious Education) classes out to the breakwater for an outing and since my mother was teaching one of the classes at the time, she came along. I don't recall how far Demeter walked out (the breakwater is very long), but I remember she was dressed in brown and what a state her stockings were in when her vertigo overtook her and she crawled off the wall on her hands and knees.

The Resident Fan Boy was very sympathetic when he heard this sad tale, being a sufferer from a fear of heights himself. We made a trip out to the breakwater last summer with younger daughter and while both made it to the end, which affords an unimpeded view of the Strait of Juan de Fuca, the southern edge of Esquimalt and the mouth of the Inner Harbour, neither enjoyed it very much. It's true; the sea wall, which is about ten feet across, felt very narrow with the sea several feet below on either side.

However, during the past year, the powers that be have erected a metal fence on either side, so Demeter declared that she would like to make her first repeat visit since her last ignominious retreat in torn pantyhose during my childhood.

The barriers made all the difference. Demeter strolled happily down to the very end and, using my Nikon, snapped seascapes for her "cover photo' on her Facebook Timeline. Then she made her way back in triumph, and took a header down the ramp at the café, despite the fact that she was watching her feet and holding firmly to the rail.

Oh, she was okay. She's a retired physiotherapist and had the presence of mind to roll, ending up with two enormous goose-eggs on either side of her forehead which made her look like Boris Karloff in Frankenstein.

Her stockings were fine, not a run in 'em. 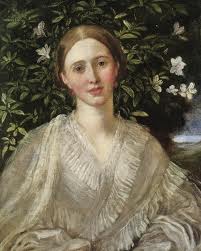 She's plump with red hair reverse-French-braided back from her temples which glow with tiny golden sparkles. Behind her, another barista, whose auburn locks hang down her back in gentle corkscrews, offers her opinion on my mullings over the possibility of a raspberry crostata. I seem to have stumbled into a Pre-Raphaelite Starbucks -- except that the Starbucks is across the street from this locally-owned coffee shop in one of the older neighbourhoods of Victoria. In a few minutes, these ginger sirens have talked me into heating the pastry and adding whipped cream blossoms. The girl with the twinkling temples fashions a three-dimensional rose atop my mocha. Tellingly, the design begins with a spiderweb. Heaven knows what they would have convinced me to do had I been a susceptible, heterosexual man of a certain age. Like, say, the Resident Fan Boy, who is a safe three time zones away. 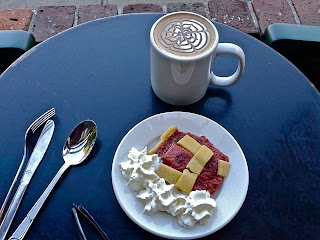 I make my way to the patio where cheeky sparrows bob along the tops of empty chairs in search of breakfast.  I lay a Hansel-and-Gretel trail of shortbread crumbs along the top of the brick partition near my knee, to see how close they will come. 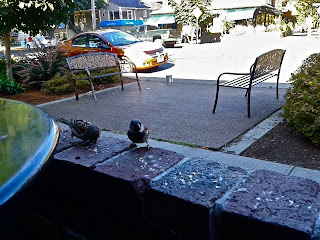 In single spies, then pairs and trios, they steal the crumbs farthest from me, fleeing at the approach of Saturday morning joggers and dog-walkers.  Several minutes later, one daring bird comes within inches of my elbow, but vanishes at the soft click of the camera shutter.