Last week, I turned to the Resident Fan Boy after viewing the second episode of Matt Smith's Doctor (illegally on the computer -- it started legally in Canada yesterday on Space and you can watch it online) and said, "You don't suppose they're all going to be this good, do you?"

Apparently not. I won't go into too much detail for those who won't see this episode for a couple of weeks, but it's written by Mark Gatiss and I wasn't that crazy about The Idiot's Lantern in the New Who Season Two. Although that was better than this.

Maybe I don't like Daleks. I was watching this with elder daughter who had just downloaded it and I asked her: "Do you think I'm just a faux-Who-fan?"
"Yep," she said.
Well, she's seventeen. What does she know? Of the Dalek-episodes so far, I disliked The Daleks in Manhatten double feature and mostly loathed The Stolen Earth double finale (except for the Donna bit). I wasn't crazy about Dalek, but quite liked Doomsday and The Parting of the Ways, so maybe it wasn't the Daleks.

Just maybe it was the awkward, clunky, stupid story. The major thing I notice about the Steven Moffat stories (and the Paul Cornell stories Father's Day and Human Nature, the latter of which gets my vote of Best Doctor Who Story Ever) is that the narrative is all. You're safe to get as scared as all get-out, because you're in the hands of a master story-teller and don't need to waste energy on worrying about ridiculous details.

Last night, I spent the entire episode going: "Whaaaah?" or "Hang on a minute.." or "Excuse me?" There was one clumsy attempt to demonstrate that the Doctor knows all about Loss, but that Amy, being human, understands Love. It came across as an ham-handed amateur psychological encounter group kneeling on a laboratory floor. Amy, to be frank, just ended up sounding a wee bit tawdry and creepy. In short, the whole plot flowed with all the grace of a graphic novel. The only graphic novel I've been able to stand is Maus. 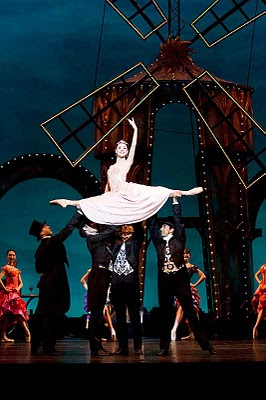 It didn't help that I'd just come in from the Royal Winnipeg Ballet's version of Moulin Rouge. I didn't like the movie, but I figured this wouldn't have Nicole Kidman and Ewan McGregor warbling Come What May. It didn't, but once again it was the insipid story that had me dozing off in the second act. Pretty sets and costumes and competent dancing simply can't save a limp plot, even in the ballet.

That night, I kept dreaming I had made fatal errors in judgment and awoke several times with overwhelming feelings of doom, futility and a sense that someone else was in the room, aside from the Resident Fan Boy. I blame noxious narratives.

Oh well, as others have said: "Bad Doctor Who is better than no Doctor Who", and less-than-wonderful art helps us recognise and appreciate what wonderful art is. Thank goodness it will be another Steven Moffat story on Doctor Who next week, complete with Weeping Angels and River Song. That should get the bad taste out of my mouth.
Wailed by Persephone at 4/18/2010 07:51:00 am 5 comments: 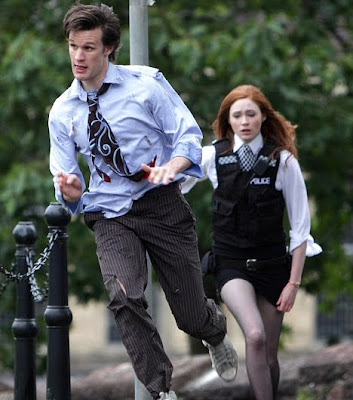 I think it was when Matt Smith's Doctor was roaring along in a firetruck when I exclaimed: "David Tennant must be kicking himself!" (Or is that a spoiler? Sorry...)

I mean, he could have been in this. And after suffering through the five overwrought specials of the last year that even David Tennant and a crew of other fabulous actors couldn't quite redeem, wasn't this a relief? It was scary. It was naughty. It was witty. It was edge-of-your-seat action. It was, in short, Steven Moffat. All hail the Moff. Whew. And where did they get Caitlin Blackwood, as the young Amy? Wasn't she fabulous? I think this is going to work. Mind you, I've been watching Matt Smith in Party Animals on TVO for the past few weeks, and knew from that and what little else I've seen him in, that he's a competent actor and that's really all you need with Doctor Who, aside from good writing. Loved Karen Gillian as Amy, trying to run full out while pulling down her mini.

Elder daughter worked her magic, illegally downloading the episode overnight and has informed me that if I keep referring to Matt Smith as "Frankenstein", she's going to get very annoyed. I can't help it; he's a literal tête carré, and I still want to stick bolts in his neck. Never mind; he'll do.

I'm so relieved. I'm off to finish my chocolate before my family returns from church, where I trust they weren't praying to Santa Claus.

You may want to have this playing while you view the following: 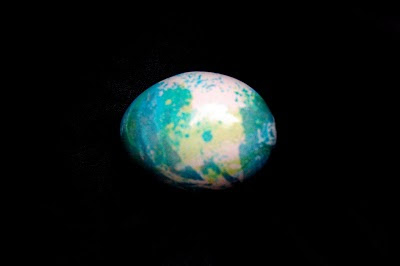 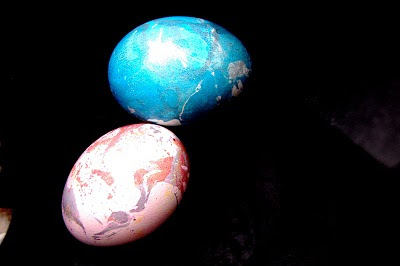 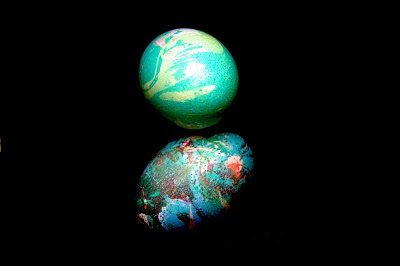 Planets collide in a galaxy far, far away? (Or in some overwrought Russell T Davies Doctor Who finale? Cheap shot, I know!) 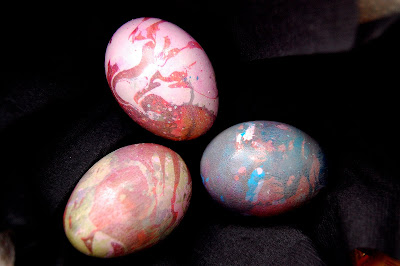 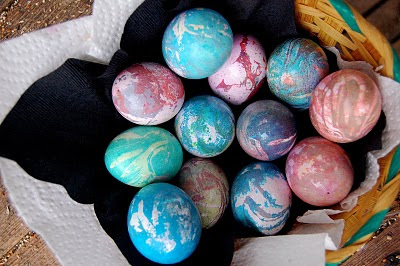 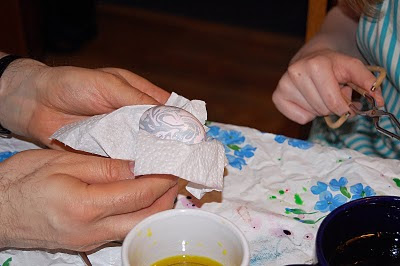 These are really simple. (If they weren't, we wouldn't be doing them!) A tablespoon each of food colouring, vinegar and (this is important!) vegetable oil into a mug or other container big enough to immerse one egg. Fill the rest of the mug with cold water. (Not all the way or it will slop over when you dip the egg.) Make sure you have aprons or old clothes and proper covering for your work surface (preferably plastic). Now grip the egg gently with some tongs in one hand, and stir one of the mugs with the other. Take out the spoon and quick, while the dye is swirling, briefly dip the egg in. Take it out, pat it dry with a paper cloth or old rag, then repeat with another colour or even the same colour for more intensity. Pat your finished eggs dry, set them aside and mop up.