Leaving out the whistles and bells 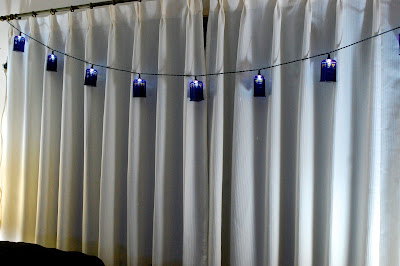 This Twelfth Night, I look at a string of blue Tardises shining against the curtain, and our tree, gradually decorated by our daughters in the week leading up to Christmas. 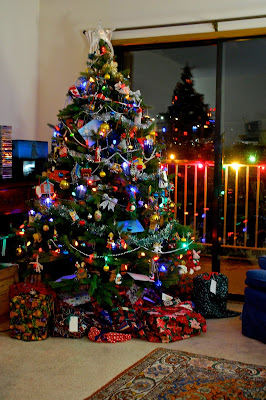 The presents underneath have gradually disappeared; we opened the last gifts this evening.

Tomorrow, as was our tradition before leaving Victoria, and is becoming so again, a couple of long-time friends will come to dinner and help us put away the tree for another year. We may leave up the other lights until Candlemas.

This evening, enjoying the quiet glow for one last time, I stumbled across an old favourite song, by a group that takes its name from one of my favourite movies. The song is about another blue light, a canary-shaped nightlight which is and isn't your friend, and muses about a lighthouse, its ancient ancestor.

I have a secret to tell
From my electrical well.
It's a simple message and I'm leaving out the whistles and bells,
So the room must listen to me,
Filibuster vigilantly.
My name is "blue canary", one note spelled l-i-t-e.
My story's infinite;
Like the Longines Symphonette, it doesn't rest.

There's a picture opposite me
Of my primitive ancestry,
Which stood on rocky shores and kept the beaches shipwreck free.
Though I respect that a lot,
I'd be fired if that were my job,
After killing Jason off and countless screaming Argonauts.
Bluebird of friendliness,
Like guardian angels, it's always near.

(And while you're at it,
Keep the nightlight on inside the
Birdhouse in your soul.)

There wasn't a readily available internet when this song was first popular, and in checking a few details, I discovered a cover in an equally quirky television series of the aughts, Pushing Daisies. This fan video captures a few seconds of it, along with a number of other old favourites sung by Kristin Chenoweth, who played a smitten pie-shop proprietor named Olive Snook in the show. Her singing partner for "Birdhouse in Your Soul" is none other than Ellen Greene, the original Audrey in Little Shop of Horrors. (Their eye-patched driver is Swoosie Kurtz.)

"Candle on the Water", which we hear briefly later in the fan-vid, also has strong memories for me. Maybe I'll tell you about it sometime. Maybe I already have... 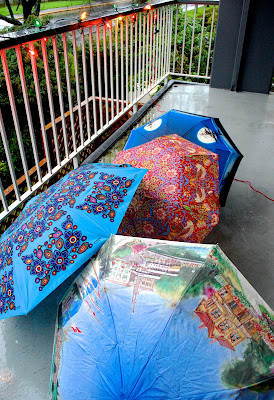 Beautiful sunny morning, after a bleak rainy day filled with reports of up-Island rivers sloshing over their banks.

My National Gallery of Canada umbrellas fortuitously arrived early in the soggy afternoon. Now, I'm sort of hiding them from the Resident Fan Boy, who got me a lovely, if small and flimsy umbrella for Christmas, festooned with First Nation moons, and made in China.
It was meant to replace my treasured, but now leaky and rusted Robert Amos umbrella, which gave me such comfort (and limited shelter) in Hades.

I've secreted my new William Morris patterned "Strawberry Thief" umbrella in my packsack, and concealed my larger and sturdier Norval Morrisseau behind other brollies. The Resident Fan Boy, not the keenest of observers at the best of times, hasn't noticed yet. He will, and his feelings will be hurt.

But this morning is blue and clear, and the first thing I spot is a crow hopping along the curb in front of our building. One for sorrow.

I exclaim out loud when I spy another crow up the road on the next block: "And two for joy! Thank you!"

I realize, too late, that I'm right next to a lady in a wheelchair, parked on the sidewalk just around the corner, having a smoke. I explain the folk-rhyme to her.

"I'll have to remember that," she says, squinting up into the sunshine.

Woke up this morning with a start. The Resident Fan Boy had gone to work - back after more than two weeks off, and I realized that it was January 3rd, and the things that seemed so far off during Christmas - aren't.

I bolted out of bed and turned on the radio.

This song, which has been getting a fair bit of airplay on CBC Radio for the past month or so, is about other things that are far off. Hawksley Workman is singing about the towns of Battleford and North Battleford in Saskatchewan, but he grew up in Huntsville, another small town in Ontario, during the 1980s.

Most Canadians growing up in any Canadian town or even city in the latter half of the 20th century, though, will recognize elements of this song.

I feel less panicky this evening. I got a few things done.

We like to begin the year with a film, but this year, it just wasn't possible.

Elder daughter took off for Hades in the middle of the afternoon, and we're bound to drift off in an evening screening, so we delayed our film until midday today - well, after the twenty-five minutes of car commercials, public service ads, reminders to turn off our cell-phones dove-tailed into cell-phone service provider ads, and oh yes, several trailers.

Our choice was The Favourite due to the cast, the premise, and the fact that it's likely to figure heavily in the Oscar nominations, if the Golden Globes nominations are anything to go by.

The Golden Globe nominations are, predictably, rather mystifying for this film. For one thing, it's been nominated under the "Best Comedy or Musical" category, even though what humour is in it is very dark. The soundtrack features baroque stuff, of course, with a rather strange ditty from Sir Elton John playing out over the illegible, but highly artistic credits. There's also a dance sequence that is so weird, I wondered if it might be a fantasy brought on by one of Queen Anne's ailments.

This brings us to the second thing: Olivia Coleman has been nominated for a Golden Globe as a lead for her role as Queen Anne of Great Britain (1665-1714; reigned 1702-1714); her costars Rachel Weisz and Emma Stone are nominated as "supporting roles" - in a film with a title that indicates the story is about them - each is a "favourite": Sarah Churchill, Duchess of Marlborough, and her less fortunate cousin Abigail Hill (later Baroness Masham). This sort of thing seems to happen a lot with women's film roles, lead roles are interpreted as supporting roles, so they can be fitted into the categories.

At any rate, it's a strange film, but quite a beautiful one. The camera angles are sometimes folded into panoramic shots, or stretched into oval fish-eyes, with the shadows, highlights and shades of Vermeer paintings, lots of dark blues, black-and-whites. You can't find fault with the acting. It's the sort of film that makes me say inwardly, as I gaze on tastefully filmed scenes of royal lesbianism and bunnies (not in the same scenes): Goodness, I wonder what really happened?

Because it's a mistake to equate film-going with a history lesson.

Don't get me wrong; do go see it, and then find out how much is likely to be true. I suggest you start here - a web site entitled History Vs Hollywood, which, currently, provides historical context on about 200 recent movies, most of them made since 2000, although films such as Jaws and Schindler's List are included.

If you're like me, you'll want to check afterwards, not ahead of time, as facts do get in the way of a good story.

Random categories: artistic license, English history, film, Oscars, what women do to each other

Welcome to the glass house

Elder daughter, who is on her way back to Hades, is a fan of Tim Minchin, who has released this bitingly funny - and I do mean "ouch" - video, as a harbinger of a new album and the new year.

The album looks promising. The year?

Let's be careful and kind out there.


By now, we thought that there would be jetpacks and flying cars,
Robots to do the cleaning-up for us,
And help with the shopping.

We'd all be famous for a bit,
That's what Andy Warhol said,
Thought we'd all get our coloured heads,
Well the truth would rock him.

He would be surprised to wake up and find that we have weaponized humiliation:

Pick up your pitchforks and your torch;
We'll go hunt the monster down,
But keep an eye out for uneven ground;
We'll turn on you if you stumble.

Don't need perspective or a heart;
Leave humility at home.
Welcome to the glass house; hope you brought your stones!
Are you ready to rumble?

I'm scared to write anything that might upset my tribe.
Never mind, 'cause in the future, everyone will have fifteen minutes
Fifteen minutes of shame,
Fifteen minutes when they are unforgivable
Irredeemable
Inexcusable
Scum
Fit only to be strung up in the village square.
I will see you there!

I am scared to say anything that may be taken the wrong way.
But, *$#% it, baby!
In the future, everyone
Everyone will have fifteen minutes,
Fifteen minutes of shame,
Fifteen minutes when they are unforgivable,
Irredeemable,
Inexcusable...
Wailed by Persephone at 1/01/2019 03:27:00 pm No comments: