The silencing of the guns - we hope 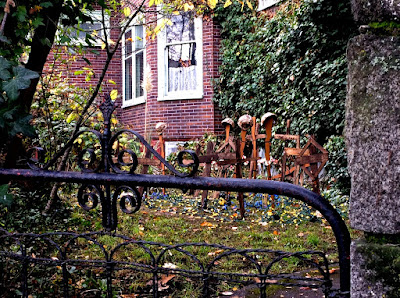 This morning, I took a different route to the library, and spotted this set-up in the garden of an ancient house near the cathedral. I used to know the people living there, but not well. I'd like to see this at night, when the nest of blue and yellow lights must cast an eerie green glow on the crosses and helmets.

Looks like Remembrance Day is going to be an extra big deal this year with the centenary of the Armistice.

This will be, so far as I can recall, my first Remembrance Day out of the country. We'll be in Seattle, seeing elder daughter, who has flown there for a conference. Years ago, a friend of mine, who lived on Mercer Island, was intrigued when I mentioned Remembrance Day. All those years living next door to Canada, and she had never heard of it. (She was unfamiliar with Boxing Day, as well.)

I've packed four poppies in my backpack, trusting we won't offend any Americans by wearing them. You never know these days.