"You don't understand my phrases"

As winter nights (and Donald Trump and his merry band) close in inexorably, I bury my head in art, drama, and music.

Recently, we went to see the New Zealand String Quartet (one of whom is actually a New Zealander) at the lovely Dominion-Chalmers United Church.

Younger daughter was furious, saying it would be too long and at night, but I felt her relaxing into a Haydn concerto, and stimming happily during a piece composed specifically for the NZSQ, which involved a playful popping bass-line (rather like that in "Somebody That I Used to Know"), and a lot of dramatic pauses to stretch on the part of the violinists.

The Resident Fan Boy and younger daughter made a quick exit during the intermission. Good thing -- the Schubert quintet that followed (with a guest cellist from the U of O faculty to make up the number) was lovely, but l-o-o-ong, especially when the regular cellist broke a string during the vigorous third movement, and had to vanish back stage for several moments.

I spent much of the time listening intently, of course, and following elder daughter's movements with my bird binoculars, as she slipped quietly into the darker recesses of the balcony to take snaps with my camera, to be published on social media -- part of her job as a communications and marketing specialist.

I recognized the second movement immediately, a summery, sleepy bit of beauty which brought out-of-focus green fields of tall grass to my mind's eye, and tried to remember which film this might have been. When I looked it up at home, I realized that it's the music that closes Conspiracy a dramatic, all-star imagining of the Wannsee Conference of 1942.

On Bank Street, largely and rather worryingly deserted at 10:30 on a Saturday evening, I searched for a bus stop where the shops weren't dark, and was accosted by a bag lady, who had a few conspiracy theories of her own. She even gave me the name of another lady who, she assured me, would tell me a different story.

"You don't understand my phrases," she said. 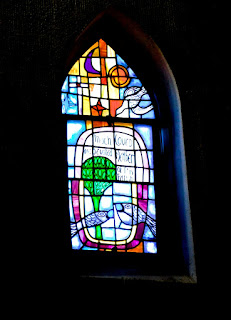 I'd been looking for a quieter and more comfortable place to wait while younger daughter has her morning voice lesson, and had noticed that the church puts out a welcome sign for the sanctuary at noon, so I slipped into the choir stalls because it was the only place with a bit of light, and I thought I might read for half an hour.

Eventually, I saw the lady bustling around, turning on the lights and putting the sandwich board on the sidewalk outside. Beyond her, I could see Elgin Street brimming with buses and cars, but the sanctuary itself was still.

I've sat in the choir stalls before, while waiting for younger daughter's turn to practise for recitals -- but never in the daytime and never this far back. The church is ringed with stained glass windows of various styles and vintages: the nineteenth century's idea of gothic, pre-Raphaelite imitations, even a bit of art-nouveau.

My eyes were drawn to two tiny windows across from my hiding place, high up with the midday light brightening them. I carry bird binoculars in my bag to avoid being caught short at shows in the larger venues at the National Arts Centre, so I drew them out, and focussed on the window directly opposite me. 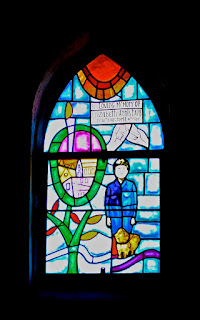 The photo I've taken doesn't really do justice to the image of a grave little woman in loose blue clothes, accompanied by what looks like a corgi on a lead, the buildings of downtown Ottawa looking bleakly beautiful and distant, caught in an oval frame, and supplicating hands floating above her short-cropped head.

The neighbouring window seems also to be dedicated to the rather lonely-looking little lady, who died at the age of 48 nearly thirty years ago: "A much loved and devoted member of this parish". In the choir, perhaps? Likely, given the position of the windows.

Who remembers her now? I hope someone does.

Not wanting to know

Oh, but last week was balmy, fading away into evenings of gentle shades of mustard and rust. We didn't know Leonard Cohen was already dead.

Down by the Rideau River, the pathway seemed to glow in a deep aquamarine. It all reminded me, a little uncomfortably, of an evening eight years ago, which also happened to coincide with the American election. 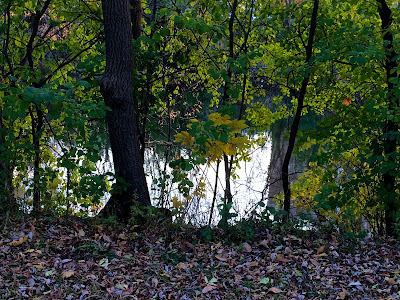 I slipped off to the Bytowne Cinema for a movie, but returned too soon, so tuned into one of the few television channels not covering the events south of the border, before scooting off to bed early.

The next morning, I awoke at 5:26 and thought:  I don't know who won.  Let's keep it that way for another hour.

So I guess my heart knew. 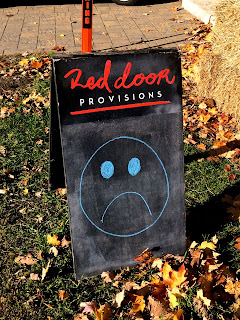 In the coffee shop, a young fella told us that his American girlfriend had voted Libertarian in the advance polls, being a Bernie Sanders fan.  They're planning to immigrate.

"The Canadian Immigration web site has crashed!" he said, the air of someone delivering astonishing news.  I knew; I'd been standing in horror by the radio speakers in my bedroom.

A man fixing his coffee at the creamer and sweetener station by the door, looked up.
"Trump got in?"

He must have been the last person in Ottawa to know.

A couple of days later, the young fella was seated with his girlfriend in the coffee shop.  He recognized me but thought he'd seen me the day before.  I reminded him it had been the morning after the election.  His girlfriend was a bit taken aback that he'd been discussing her vote with strangers.

"I didn't vote for Trump," she muttered.

I decided it would be unkind to point out that, if she hadn't voted for Hillary Clinton, she had essentially voted for Trump.

Every morning, for the past week, I've woken up with a feeling similar to that when I first learned that younger daughter was special needs.  I feel depressed, trapped, and rather terrified about the future.

At the very least, I don't know how I will be able to face seeing and hearing the likes of Newt Gingrich and Ann Coulter in the media again.