Waiting for the great leap forward 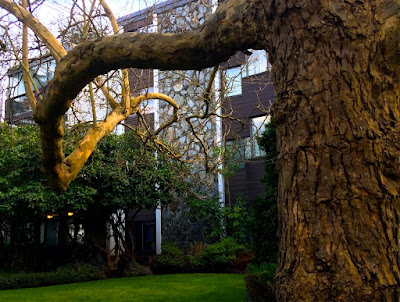 I love the evening light of this in-between time, as the year rolls away from winter and dips toward spring.

It's also my first leap-year in Victoria since 2000. I had four in Hades. I don't remember much about the one in 2004, but, thanks to this blog, I know that in 2008, I was struggling with the nightmare that younger daughter's elementary school had become; in 2012, Davy Jones of the Monkees died; and in 2016, we were struggling to stay ahead of one of the heavier Hadean snowfalls sent to remind us that March has nothing to do with spring in Hades.

I saw daisies today in Victoria. And I saw the soft golden midway light hitting the enormous sinuous branch making a left turn in front of where we live.

Leap days are rare and precious things. Most of us don't get that much more than twenty of them.