On the morning of my nicest birthdays in a long time, I headed down Linden street, which has been in a perpetual state of spring since January. 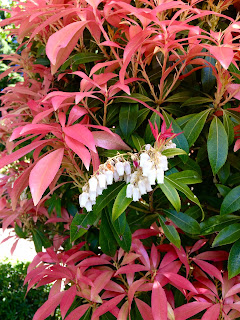 They've just planted one of these in front of our apartment building and the tag is still on it, so I know that this glorious melding of scarlet leaves and dangling white bells is a japonica ("Mountain Fire" variety, I think).

This has been their week.  The relay of cherry blossomings across the city is coming to an end; pink magnolias are littering the sidewalks now, and the star magnolias are constellating all over the place.

And this birthday morning was perfection.  My kind of perfection.  I perfected it with some happy noodling on my family history timelines, then we strolled out -- the Resident Fan Boy, younger daughter, and I -- to rendezvous with a pal at a deconsecrated church where the Tallis Scholars were appearing in Victoria for the very first time.

As the singers entered, there was a powerful wall of applause -- as if they'd already performed.

An expectant silence, and then -- a creamy blend of ten voices - two in each vocal range - pouring out Josquin, Palastrina, and other choral composers of the 15th to 16th centuries.

I nearly burst into tears.

They didn't sing this, and some of the singers were different, but it will give you an idea.

There were two items from the twentieth century. The first from Arvo Part (famous for his heart-rending Spiegel im Spiegel).  This was called The Woman with the Alabaster Box -- a sort of tone poem based on the gospel story of the woman reproached for "wasting" the expensive oil on anointing Jesus.  (After the concert, I reminded younger daughter of the version of the same story that is part of Jesus Christ Superstar.)

During the intermission, I was reminded, yet again, that I'm in Victoria.  A woman approached me, head cocked to one side, saying my name in a tentative manner.  She apparently remembered me from my hospice volunteer days - of which there were several.  She definitely remember elder daughter, who was something of a hospice mascot as an infant and toddler, so I could place this lady in time, but not quite in face.  I gazed into her eyes and saw vestiges of familiarity, inwardly marveling at her ability to recognize me after all this time and too abashed to ask her last name.

I'd also recognized one of the singers from last summer's ChamberFest in Ottawa.  He'd been one of the members of Cinquecento  - another transporting musical experience.  Elder daughter confirmed that he also sings with the Tallis Scholars, and that he's "very gracious and very British".

With the second half came the second 20th century composition, surrounded by beautiful, more ancient numbers - mostly masses for noble patrons and patronesses who had died five centuries ago, with lots of  "Dies irae" and "Let light perpetual shine upon them".

But this was a song for a young woman who had died in a cycling accident when elder daughter was one year old.  A family friend of the composer, she had loved Shakespeare, poetry, and drama.  It was extraordinary to hear "Song for Athene" by John Tavener sung by only ten voices -- especially given that the bass continuo was performed by one person, who seemed to not pause for breath during the entire seven-minute piece.

I don't have access to a recording of the Tallis Scholars singing this, but here's a very lovely recent rendition:
When the last note died away, the applause rose amid rolling stamping.

And we moved out into the late afternoon, down the cool but sunny streets, to my favourite Italian restaurant, where I ate risotto, and was toasted by my husband, younger daughter, and good friend in the light of the candles and fireplace.  Not perpetual, but few lovely things are.
Wailed by Persephone at 4/30/2018 10:42:00 pm 1 comment: