He's got one of those shaved-up-the-back-and-sides haircuts, with a lid of dark tousled hair tilting towards his forehead on top - the kind of haircut that will probably embarrass the hell out of him when he looks back on his selfies years from now.

He ferries things to his chosen table - laptop, expensive-looking leather backpack, iced coffee, wallet - all the time talking softly.  He's got earbuds in and continues his conversation, sometimes looking into the middle distance, sometimes rubbing the closed lid of his laptop with his fist, circling and scratching some imperfection.  He lifts the lid, closes it, lifts it again, talking all the while, turning his head to listen as if the person on the line were sitting in front of him.

When the conversation ends, he moves to the other side of the table to face out, rather as if his phantom partner has left, and the bench is now free. 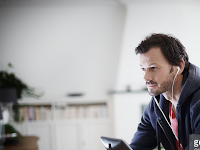 Within seconds, he's speaking softly again, his hands hovering over, but never touching, the keyboard.