Must be Wainwright week

PBS recently re-televised a truncated version of last year's Shakespeare Show, but they didn't excise Rufus Wainwright's performance of this.
Wailed by Persephone at 8/11/2017 08:55:00 pm No comments:

The Resident Fan Boy is a P.K. (Preacher's Kid), the son of an archdeacon, so when he wandered out into our neighbourhood, he first saw this new variation on street signage from the other direction, and caught himself thinking: No, isn't it Trinity? 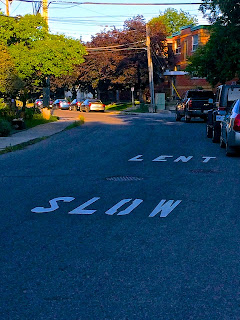 Younger daughter has been repelled by the steady decomposition of a squirrel in the gutter near our house. I introduced her to this, by the man who's now chiefly famous for being Rufus Wainwright's dad. My Grade Eleven Biology teacher used it for his theme on a module on molds. Good times.
Wailed by Persephone at 8/09/2017 08:59:00 pm No comments:

I've probably mentioned this before, but I used to have a friend who marketed !2-Step teeshirts and greeting cards. My favourite was a pair of staring white eyes against a pitch-black background with the caption: "I know that when one door closes, another one opens, but MAN, these hallways are a bitch!"

I loved it because you don't need to be recovering from an addiction to find yourself in a dark corridor after a door has slammed shut.

Because I can't resist.

Why do they call it the past when it's never past?

There's always so much more to a concert than the music -- especially at Chamberfest.

A few nights ago, the Chamberfest Chamber Orchestra, eighteen top-notch musicians led by Julian Rachlin, a violinist who, I gather, is a big deal - I'm not that knowledgable about violin virtuosi - contrasted Vivaldi's Four Seasons with twentieth century composer Astor Piazzolla’s Four Seasons of Buenos Aires.

I'm fond enough of Vivaldi and the Piazzolla piece had its moments - again, I don't have a great ear for violin music - but what was going on in the audience and on stage provided plenty of entertainment.

We had the usual drama with the generous donor who has a reserved seat right in front of us. This time, a lady sitting with a party of four, when confronted with the donor claiming her seat, handed the laminated reserved card, on which she had been sitting partially, to the volunteer who had come to help, with an air of largesse and mild puzzlement, as if she didn't understand what "reserved" meant, or was under the impression that the seat had been reserved for her. (She and her party had probably paid top price to seat in the front row of the balcony.) The Resident Fan Boy calls this "Ottawa entitlement". Gawd, I'll be glad to leave this city...

The volunteer asked repeatedly if the party would like to take special seats in the second row, for their comfort. The gentleman in the party switched seats with the "gently puzzled" lady and shook hands with the donor -- perhaps guessing the reason for the reserved seat.

Meanwhile, there was plenty of excitement below. The virtuoso snapped a string in mid-passion, and barely breaking stride, commandeered the concert-master's instrument, while she relieved the second violin of hers. Second violinist scurried backstage to re-string, and the instruments went back up the food-chain in the next movement.

The first violinists included a towering gent with flowing ginger locks named Edwin Huizinga who mugged at his fellow musicians and plucked his violin, not lasciviously but slyly, during the second movement of Vivaldi "Winter" concerto. I can't provide you with a visual, but here's the movement in question:

Elder daughter tells me that Huizinga is a character (really?) who prefers couch-surfing to home ownership. I gather from his Facebook profile that he's rarely in one place for long.

For comparison purposes, here's the "Winter" portion of Astor Piazzolla's Four Seasons of Buones Aires - without the mugging, as it's a different chamber group. 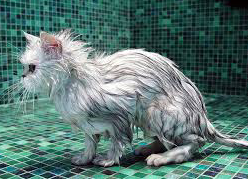 In the middle of a row with the Resident Fan Boy - which usually lasts a day or so because speech fails me - I dreamt that I was standing on a sort of porch gazing into a deep pool of green water.

Suddenly, I saw a fish fall into the water; it turned into a kitten with a resigned expression on its furry face. The fish-kitten began to sink like a stone as I looked on in bafflement. A friend from high school plucked the plummeting creature from the water and berated me. I followed her to a staircase and told her that she had no right to be so high-handed with me.

"I dreamt I called Gwen a bitch," I informed elder daughter the next morning. "I woke up thinking she'll be unfriending me on Facebook."

Saw the flick Dunkirk today, so now I've got Nimrod on the brain.

Just try to name them all

Running out of time again, and I recalled that I haven't checked in with Thebigbluemeany for years.

I found this gem, among others.

A complex tapestry of smooth silk

I really didn't want to go out last night, and as usual, when this happens, I ended up being so glad I did.

Elder daughter works for the Ottawa Chamberfest, so we have season tickets, of course. Still jet-lagged, I clambered ponderously up into the balcony of Dominion-Chalmers United Church, the sanctuary glowing golden in the early evening sun of midsummer to hear a quintet specializing in early music called Cinquecento. I imagined they might be something like the King's Singers.

Five men duly appeared below, in dark but casual suits with open-necked shirts in muted shades of blue, green, silver, rose, and purple. They passed a tuning fork like a cigarette between them, opened their mouths and the most full and beautiful notes flowed out and filled the church.

They were singing, mostly in Latin, pieces by 16th century English composers: Tallis, Byrd, and Tye. All the pieces were ethereal and lovely, but I particularly liked a Tallis Vespers (or Compline?) prayer Te lucis ante terminum (sung in two different settings, at different points of the concert) which begins with the voices singing plainsong before splitting off into complex skeins of colour.

The English translation, which says in part: ". . .From all ill dreams defend our eyes/ From nightly fears and fantasies/ Tread underfoot our ghostly foe . . . ." had a certain appeal for me.

I'm still a little bit in outgoing Victoria mode, so at intermission, I struck up a conversation with the fellow in our pew, whom I'd noticed drinking in the music with eyes closed. It turned out he's in a choir, and he had interesting observations about how the quintet spent the first three numbers subtly adjusting to the scope and acoustics of the church. Remarkably he had not heard of the 40 Part Motet at the National Gallery. (Gee, I hope it's still there.)

I don't often stand for standing ovations, because I think Ottawa audience stand for pretty well everything. I stood this time. They gave an encore of a 16th century setting of Ave Maria.

It wasn't this one, but it's the only video I can find of Cinquecento in action. It was recorded last year. It's beautiful.