During the past week, I have accomplished two things. Now, I'm not especially proud of this; these are two things that have been hanging over my head and weighing me down for several months. However, this week I completed them. The boulders have removed from my road and I can see my way clear --- to the Christmas cards I need to write and the presents I must purchase and....

Here's the song that's been playing in my head as I plunge into my so-called future:

The light is dark enough 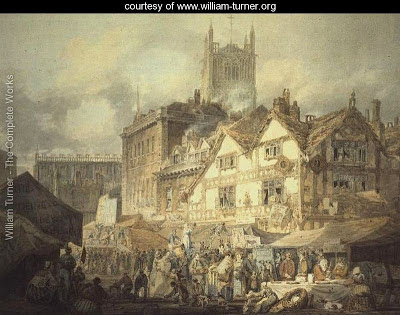 This morning, I checked in at John Reid's Anglo-Celtic Connections, which is always a mistake when I have other things that need doing. He provided links to two historical Wolverhampton blogs which are new to me. One is focusing on the impact of the First World War on the city. It certainly had an impact on my family: my great-aunt died in the influenza epidemic that came home with returning soldiers, and my great-uncle committed suicide in the 1930s, partly due to his physical, mental, and emotional war wounds. The other blog provides, among other things, pictorial tours of various areas of the Black Country, of which Wolverhampton forms a part.

And I stumbled upon this 1795 painting by one Joseph Mallord William Turner, aged about twenty at the time. JMW Turner became famous for his later paintings, masses of light, paintings in which it is difficult to pick out the subject because by that time, the light was the subject. Demeter has always loved those later works; she has a print of The Fighting Téméraire in her living room, which she can't see right now because she's recovering from an eye procedure and must sit in the dark for 48 hours.

So I must wait to share this with the great-great-great-granddaughter of John Meanley of Wolverhampton, an innkeeper in Snow Hill who took the first of his ten children to be christened, possibly making his way through this market place toward the imposing tower of St Peter's Collegiate, the morning of January 3rd, 1796. I wonder if he, his parents (who also married at St Peter's), his siblings or his wife ever brushed by a young man in the city the previous year, sketching this view while facing north where Queen's Square meets Lichfield Road. At any rate, this is something they must have seen almost every market day, and being the Black Country, I doubt the light was the subject of anything.
Wailed by Persephone at 11/22/2012 07:45:00 am 2 comments: