The squeal of the Sciurini 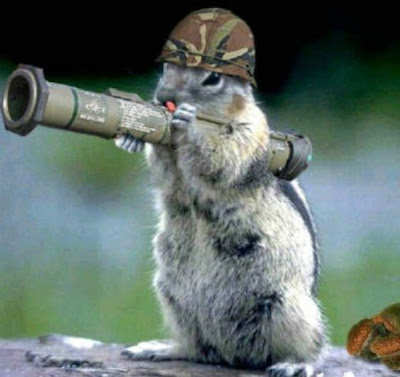 I've spent a chunk of this past month listening to the prancing and pawing of each little roofer. Well, they were actually very large sturdy chaps, the kind who probably do well picking up women at bars. Still, they were fairly loud: "Stomp...Crash...scrrrrape...."

They were redoing our roof, and reopening our hatch, so, instead of climbing a wobbly extendable metal ladder to do maintenance, we can climb a wobbly shorter ladder and haul ourselves up through a dark hole while attempting to push up the hatch-lid. I'm not exactly looking forward to the prospect of this as a yearly ritual, but I got a third of the way up the aforesaid extendable ladder one balmy evening last week before realizing that the hatchless option was not going to work for me. I retreated on shaky legs and in deep shame while the aforesaid sturdy chaps chuckled, not unkindly.

They're gone now, leaving a new roof and dead vines drooping down the front of the house, so I cleared away the obstacles barring the entryway to the dusty, drafty bedroom balcony we never use, shouldered a large pair of secateurs and set out to prune the dangling doomed bits of Virginia Creeper. I found myself eye-to-eye with an indignant squirrel who had been using several winding tendrils of dropped vine to create a large nest on a ledge next to the balcony. She flattened herself on the stucco and hung on the wall defiantly, chattering rodent threats. I didn't have the heart to shove her nest over the precipice, so trimmed away at any lifeless vegetable matter within reach.

I carefully shut all doors leading to the upstairs balcony and trotted downstairs to sweep the front path of debris resulting from my trimming and Ms Squirrel's housekeeping. I saw some trailing wilting ends within arm's reach and started giving them a good yank. I had to leap backward as the squirrel's concoction, a large tangle of vine, chewed up newpaper and what looked like a head-sized gauze bandage, plummeted down the side of the house. I looked up and the squirrel peered back at me from the edge of the roof, seemingly frozen in shock.