A sense of direction 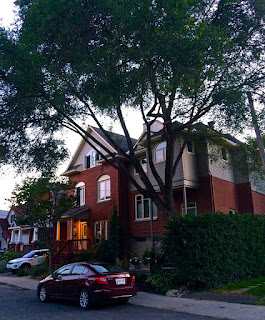 I don't recall hearing the sound of cicadas until September 1st, 2000, my first full day in Hades. I thought the piercing, intensifying buzz came from the wires. I've mentioned before that the electrical shrill of the cicada is my least favourite noise in the world. The hotter it gets, the louder they get.

Sometimes, when I go out for my evening walk with the Accent Snob, I try to pretend I'm wandering through the streets of Victoria.  I do this by mentally changing my orientation.

This may not make a lot of sense, but I'll try, because I can't believe I'm the only person that experiences the world this way.

See, when I was a little girl in Edmonton, I knew where east/west/north/south was, even on a cloudy day, or at night.  I had an internal compass.

I noticed, though, when we travelled to another neighbourhood, city, province, country, that my compass seemed to disappear, or at least swing around another way.  For example, when we moved to Victoria,  just before I turned nine, the sun appeared to rise in what I thought of as being north, and set in my perception of south.  For the most part, my internal compass remained in this new orientation through our moves within Greater Victoria , to View Royal, and to Esquimalt.  I came to think of this as "Esquimalt orientation", because when I was in downtown Victoria, or points east such as Oak Bay (with the exception of the area around the University of Victoria), the sun appeared to rise in the west and set in the east.

Does this make any sense?  Am I the only one this to whom this happens?

I've never found it distressing; it's just the way things were and are.  When we moved to Fairfield just after the birth of elder daughter, the sun slipped into "downtown orientation" and sank in the east.  I rather liked it that way.

Here in Hades, most of the city is in "downtown Victoria orientation" for me -- except for our street, most of Lindenlea and Rockcliffe Park, and all of Vanier, which all, for some reason are in "Esquimalt orientation".

The odd thing - if you haven't given me up as being crazy already - is when I take the Accent Snob to the park alongside the Rideau River.  As I step into Ivy Crescent, the world slides back into "Edmonton mode",  the sun setting into my childhood perception of west.  It's almost a nostalgic experience.

When I'm feeling sad or homesick or both, I try to force my orientation back into "downtown Victoria" mode which results in the illusion of transforming New Edinburgh into an imaginary neighbourhood somewhere to the south of my last Victorian home.  It takes quite a bit of mental effort to hold it there -- especially since the surrounding redbrick buildings and Dutch-oven houses  are nothing like the 1970s condominiums and gingerbread-y older houses of Fairfield.

When I'm surrounded by the multi-coloured autumn leaves that are unmistakably eastern Ontario, it will be even harder and impossible during the six-month Hadean winter.  The brief two-week spring, which is the only time Ottawa is anything like Victoria, is the easiest time.

Still, it's a way of looking at the neighbourhood with different eyes and I play the game for as long as I can.  It's harder the closer I get to our house.  The deafening chorus of crickets and cicadas eventually undoes me, and I'm standing alone, except for the dog, in Hades.
Wailed by Persephone at 9/01/2016 01:03:00 pm No comments: