On Saturday afternoon, we made our way downtown to pick out our trio of pumpkins. Small groups of Muslim girls were moving through the Byward Market, passing out crimson and cream roses to the passers-by, in honour of Eid, I suppose. 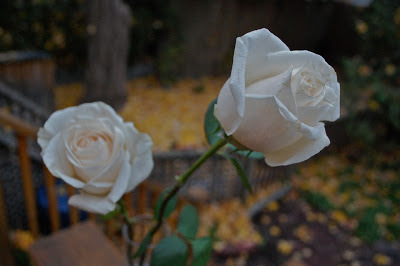 I was delighted when younger daughter and I were presented with cream roses; we were cradling them and admiring them when we boarded the Number Seven bus for home.

That was why I didn't notice the zombies.

It took a few moments for me to realize why the bus was so crowded, unusual for a Saturday afternoon. I looked across the aisle at a man swathed from head to shoulders in a bloody bandage. The girl next to him appeared to have part of her cheek eaten away. Many other young passengers were in various states of decomposition; several had crimson and cream roses.

A man turned to the Resident Fan Boy and laughed, "It's like Woodstock for the Undead!"

They clambered off at McDonald Gardens Park where hundreds of men who died building the Rideau Canal are buried under the large mound. I wonder how many of the young zombies were aware of this, as they staggered back to the Parliament Buildings clutching their Eid roses.