From my table at Planet Coffee, I can see a man in the breezeway, standing in the space between two benches on the wet bricks.

He's talking steadily, gesturing as if he were giving a presentation or sermon. He looks a bit like an actor memorizing a speech. His expression is earnest, and his focus, although inward, moves smoothly to various parts of the tiny plaza, as a speaker would, surrounded by rapt listeners. He has an earpiece in his ear and a cellphone held loosely in front of him at waist-level.

I can't hear him through the thick glass, but I find myself hoping he really is talking to somebody...

Red is the colour of my shame-faced skin 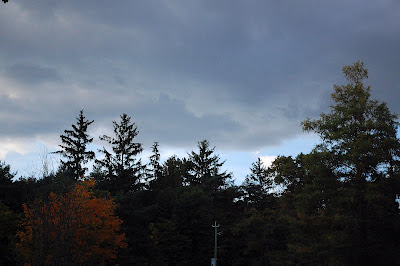 Someone has drawn an eiderdown of greyish lavender clouds across the sky, with just a vestige of the earlier day's bright blue trailing at the edge.

I look out the kitchen window at a freshly-painted chartreuse table in the centre of a large square of brick tiles. When the unimpeded sun was shining in the late morning, I spotted one of our neighbours digging out a square of soil and pulling bricks to the edge of it. I had assumed she was setting out a garden patch like the one she established in her front yard in bits and pieces over the past year or so.

With a shock, I realize that this lady, a spry but elderly woman who cares for her tiny grandchildren when not moving the earth, has not only paved the backyard, but has also painted the table. All in the space of the afternoon.