"Go home to your families!" 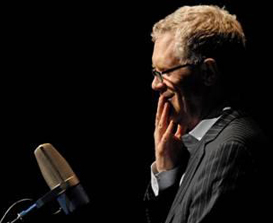 In mid-February, before I was felled by the flu and locked up inside for a week, I battled the mean streets of Hades -- well, mean sidewalks, actually. Oceans of colourless slush hemmed in by the berms which the city had failed to scrape away. Exhausted, damp, and chilled, I found myself on a twilight bus, checking my phone, like the other grey citizens of Ottawa. I saw bad news, and reacted in my early twenty-first century manner: I reposted it to Facebook, texted the Resident Fan Boy, and read the details at various news links on social media.

The lady next to me indicated that she'd like to get up.
"Oh, I'm getting out too," I assured her. "I'll just shut down my phone."
"I'm sorry, but I couldn't help noticing -- has Stuart McLean died?"

And we pulled our things together, sidling toward the exit, while talking of the Vinyl Café concerts we'd been to, and our favourite Dave and Morley stories. She said her parents would be especially upset; I told her the Resident Fan Boy had been a Stuart McLean fan since Morningside. She was probably a little too young to remember that far back.

I guess scenes like this were playing out across Canada on the evening of February 15th. By dinnertime, my expatriate friends were chiming in from the other sides of the globe.

I started listening to the tales about Dave and Morley when our daughters were tiny, and we couldn't get out much. The RFB and I attended our first Vinyl Café Christmas concert about twelve years ago. We spent that evening tucked up in the highest reaches of the upper balcony of the National Arts Centre, wrapped in the warm waves of laughter. After three or four years, we started taking our daughters along. Elder daughter love the stories; younger daughter loved the music. Since Ottawa was almost always the last stop of the tour, between 2003 and 2014, the Christmas show was our signal that the holiday was prepared for and truly beginning.

Stuart McLean was midway through the concert tour in 2015 when he learned he had melanoma. There was no Vinyl Café Christmas in Ottawa that year. In December 2016, the CBC stopped transmitting the Vinyl Café repeats. My heart sank a little then, but that mid-February phone flash still came as a shock. He was only 68. We had hoped for more Christmases, and more stories throughout the year.

One of the year-round features of the Vinyl Café programme on the radio was The Vinyl Café Story Exchange. The rules were simple. It had to be short, and it had to be true. Here's a story I'd always meant to share:

The week before the Christmas of 2005, the Resident Fan Boy and I attended the final Sunday matinée of the Vinyl Café season at the National Arts Centre. We were in Southam Hall, which is the largest of the four theatres that make up the complex. Before the Hall was renovated last summer, the rows in the orchestra section were lo-o-o-o-ong and curved, with no centre aisle. To add to the confusion, odd-numbered seats were all on the left, and even-numbers all on the right. The RFB and I attend several events at Southam Hall each year, so we took our seats by entering from the left aisle. Lots of people coming to the Vinyl Café, however, were from out-of-town, and/or rarely had a reason to come to the NAC.

Shortly before the show, a roly-poly lady entered our row from the left, and laboriously picked her way towards the centre, necessitating every one in her path to stand up and let her by.

A few seats beyond us, she stopped, quizzed a couple of people about their seats, and only then double-checked her ticket. It became clear from her body language that she was in the wrong row, marooned smack dab in the centre of the huge theatre.

By now, those of us who had risen to let her by were commenting on her predicament.

"Well," I remarked, "at least she's keeping going! Better than turning back and irritating the same people twice!"

"This is like a Bob and Morley story," declared the fellow sitting in front of us. He launched into an pitch-perfect Stuart McLean impression, complete with the trademark Stuart-stutter: "She was in the wrong row, so she-she-she just kept going! She-she didn't want to irritate the same people twice!"

We were all breaking up. The lady got to the very end of the row, way, way over on the right side of the concert hall, then had to circle back to the left side of the correct row, and get all those people to stand up to let her by.

The fellow in front kept up the monologue: "She-she-she finally made it to her seat. Ev-everybody applauded. She had no idea why!"

We all promptly broke into applause. The lady looked about her in bewilderment, as we dissolved into conspiratorial giggles.

That's what you could call a Canadian mean streak, I guess. It was about as mean as Stuart McLean ever got.

If you were there in person at a Vinyl Café Concert, Christmas or not, you got to hear the final line that never made it on the radio broadcast. The applause would just go on and on, until Stuart called out in mock-exasperation: "Go home to your families!"