Why searching for lyrics online is a bad idea

...because it's a great way to get a virus. Something has "intruded" on my desktop, leaving other family members unscathed for some reason. We're getting a little man in. See you later. (I hope.)
Wailed by Persephone at 2/20/2010 06:50:00 am No comments:

Why channel-hopping is a bad idea

I really should only watch commercial-free television, at least when I'm alone with the set. This is because I can't resist flipping through the channels with my trusty remote while I wait for whatever I'm watching to return. I've been burned as a result, on three memorable occasions which left me fighting off disturbing images in my dreams and in my waking hours for days afterward. You'd think I'd learn.

There was the time about ten years ago when I stumbled on to a particularly vicious slasher film starring that noted thespian Corbin Bernson. As it was 4:30 on a Sunday afternoon, I was startled, horrified, and traumatized to catch a glimpse of a dentist using the tools of his trade to take revenge on a straying wife.

See, I don't see myself as a rabid anti-porn crusader. I don't care for it; I don't think it's done any favours for how women are viewed in society, but I don't embark on letter-writing campaigns. However. I don't like being ambushed. Okay, maybe I need another word. Moving on...

You may have heard that Canada is hosting the Winter Olympics this year. If you're in Britain, your intrepid reporters have apparently been telling you that these are The Worst Olympics Ever. Well, maybe so. It's been less than a week, the Summer Olympics at Atlanta are heavy competition for the title, and I'm 3000 miles and three times zones away, so I wouldn't know. I would like to just gently say to the British media: Let's just wait until you're safely shot of the 2012 Olympics in London, shall we, boys? Just sayin'...

Anyway, we all know what the Olympics mean. Commercials. There are about fifteen let's-support-our-athletes-by-buying-this-crap ads in heavy rotation and we've been treated to them since last autumn. My fingers strayed inexorably to the remote....

Bad move, Persephone. On TV5, I was confronted by a rapid sequence of images of Nazis being hanged. By Americans, by Russians, by Poles... As you can imagine, the techniques varied in their efficiency. Frozen in horror, I failed to switch the channel before the documentary-makers felt it necessary to demonstrate why these fellows were being strung up. And I don't mean the stock footage of naked people being driven to ditches and shot, dazed prisoners staggering off freight trains en route to the gas chambers, or the bulldozers burying piles of bodies at Bergen-Belsen. You may want to skip the next paragraph.

A man in a laboratory coat is dispassionately flipping a naked girl. She's, I dunno, somewhere between six and nine. He's gripping her hips, and holding her out at arm's length in front of him, makes her body flick out like a whip, her head snapping back. Crying and crying, she hangs in the air with her knees drawn up to her chest and her back curved over. I couldn't bear to see what he would do next and flipped the channel, gasping for breath, leaning over my own knees.

I imagine, or least choose to imagine, that the makers of La Traque des Nazis (a documentary on longtime Nazi hunters Serge and Beate Klarsfeld) meant well. Why is it, then, that I feel this is feeding into yet another kind of porn? It seems to me that there is an appetite out there for footage of executions and tortures, ranging from those who get the glad-it's-not-me frisson to those who actually like watching this stuff. Does a documentary like this educate, or does it pander to such people? Does it stop such things from happening again, or does it provide (heaven help us) inspiration?

As for me, I've been sitting on those long bus-rides to and from younger daughter's school, gazing out at the bleak landscape and trying to chase away horror and despair with music. This was probably not the best week to get that Beautiful South CD out of the library (geez, talk about "bleak"), but there are songs on my iPod to make my heart lift for a while.

Here are a couple, if your heart needs lifting too. The first is a Great Big Sea standard, and happily, there's a classic 2006 music video by Almost Angst Free Productions (since we were talking about David Tennant and Christopher Eccleston, so why not drag Paul McCann, Tom Baker and Sylvester McCoy into it?): I've probably embedded this one before, but I don't care...

The other is brand new (to me). I was listening to CBC Radio Two yesterday morning while waiting at the bus stop and Bob Mackowycz said this one just makes him "melt". So he played it and I did some mean back-up singer moves in the fresh snow. Fortunately, the street was deserted. Although I did dance into the bus... Forty Days. Hmmn. Well, Lent began yesterday, so there you go. Giving up channel-hopping seems a worthy Lenten goal...
Wailed by Persephone at 2/18/2010 09:39:00 am 1 comment:

Persephone versus the twenty-first century 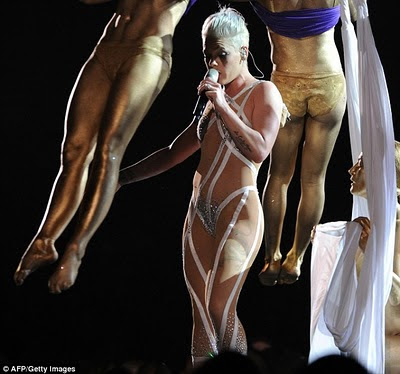 We're nearly ten years into the new century (yes, nearly - the century began January 1st, 2001 for those of you who can't count), and somehow, I feel I'm failing to get the hang of it.

Take last weekend. On Saturday, we went to see the Boston Ballet on its very first trip to Ottawa. This was a mixed shorts evening, unusual for Ottawa which, being The Nation's Capital, usually gets full-length ballets. This is a pity, because an evening of shorter pieces usually gives you a much better idea of the range of the company. The range of this company was considerable, featuring the usual Balanchine offering (a stage full of ballerinas with one lone male to carry them about), two modern pieces, a Fokine and a Nijinsky.

The Nijinsky was, of course, L'après-midi d'un faune with the costumes pretty well exactly the same as when Nijinsky and his lot scandalized Paris in 1912. Debussy. Dancers dancing like two dimensional figures on a Greek vase. Win. 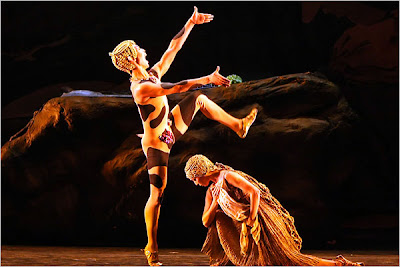 We got another taste of post-Victorian eroticism in Le Spectre de la Rose, Michael Fokine's romantic mini-ballet of a girl returning from a ball and having a rather hot dream about the rose she's brought home. Win.

My favourite was ein von viel, actually a Canadian piece choreographed by Toronto's Sabrina Matthews, set to Bach with two male dancers “fugue-ing” along with the magnificent pianist on the stage, echoing each other’s movements, then freezing as the pianist turned the page for the next movement. The audience wanted to clap after each movement, but I sat on my hands and applauded hard at the end. I don't know if that was right, but it was how I felt. Big win. 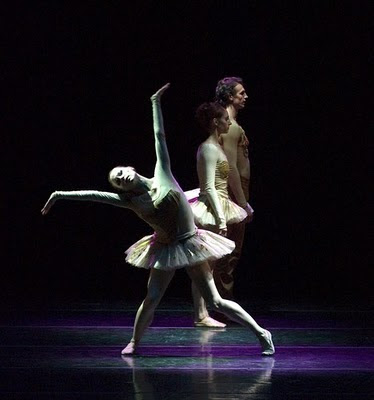 The other modern piece was Brake the Eyes by Boston Ballet's resident choreographer Jorma Elo, really odd and rather nightmarish with Mozart and soundscapes, plus the mutterings and giggles of the lead ballerina. I couldn’t tell if her voice-track had been pre-recorded or if somehow she was miked, as the light fixtures changed with each movement, highlighting the tension and muscles of the bare legs. I thought it was pretty cool.

Twentieth century: three (even though I'm not that crazy about Balanchine)
Twenty-first century: two.

Then, on Sunday, as if to contrast with what we'd seen Saturday, we were confronted with...The Grammies... 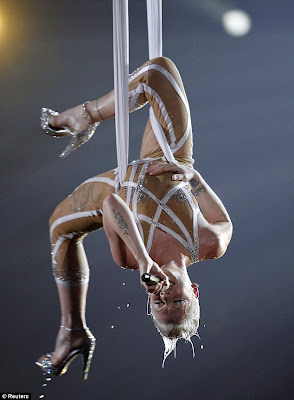 I think I made it through the first four overwrought overproduced extravaganzas before I finally reached for the clicker.
We had Lady Gaga. ('Nuff said.)
We had Green Day with the cast of (wait for it) their Broadway show. (Hunh?)
We had Beyoncé, complete with gladiator garb; trademark cross-over runway strut, belting out one of her songs meshed with, inexplicably, Alanis Morrissette's "You Oughta Know".

Then, most baffling of all, Pink (whose lyrics are usually quite literate) stripped down to a strategically wound bandage, threaded herself in a sling, and while dangling below a circle of three spread-eagled acrobats in gold bikinis and body paint and high above the audience, turned herself into a spinning human sprinkler head in six-inch heels. Oh, for Pete's sake, Pink. Get off my lawn. What I wanna know (aside from "Why???") is how the people below felt about getting their expensive evening wear and leather jackets sploshed with what appeared to be a helluva lot of water. Also, how Pink returned to a no-doubt very wet platform and didn't fall on her butt.

Faced with a prospect of Michael Jackson and Céline Dion in 3D, country singers ripping off the Alex Parsons Project, Taylor Swift, and hip-hop and rappers, I searched for something else to watch, feeling very old.

On the bright side, I'm getting the hang of my new iPod, finally figuring out this week how to download podcasts. It took several more days to learn how to actually get them on to my iPod, but let's just rejoice in the moment, okay? I've been listening to CBC Radio Two on the hour's return bus journey after delivering younger daughter to school. I've been rather startled to discover that I rather like what I've heard of a Somalian-Canadian rapper K'naan. This week, I was listening happily to a song of his called "Fatima" which, during the first verses, sounds like a wry ditty about a lost adolescent love:
Fatima,
What did the Young Man say
Before he stole you away....

As the song continues, a sadder story emerges and my heart sank. Fatima didn't go away willingly: