Where the sidewalk ends 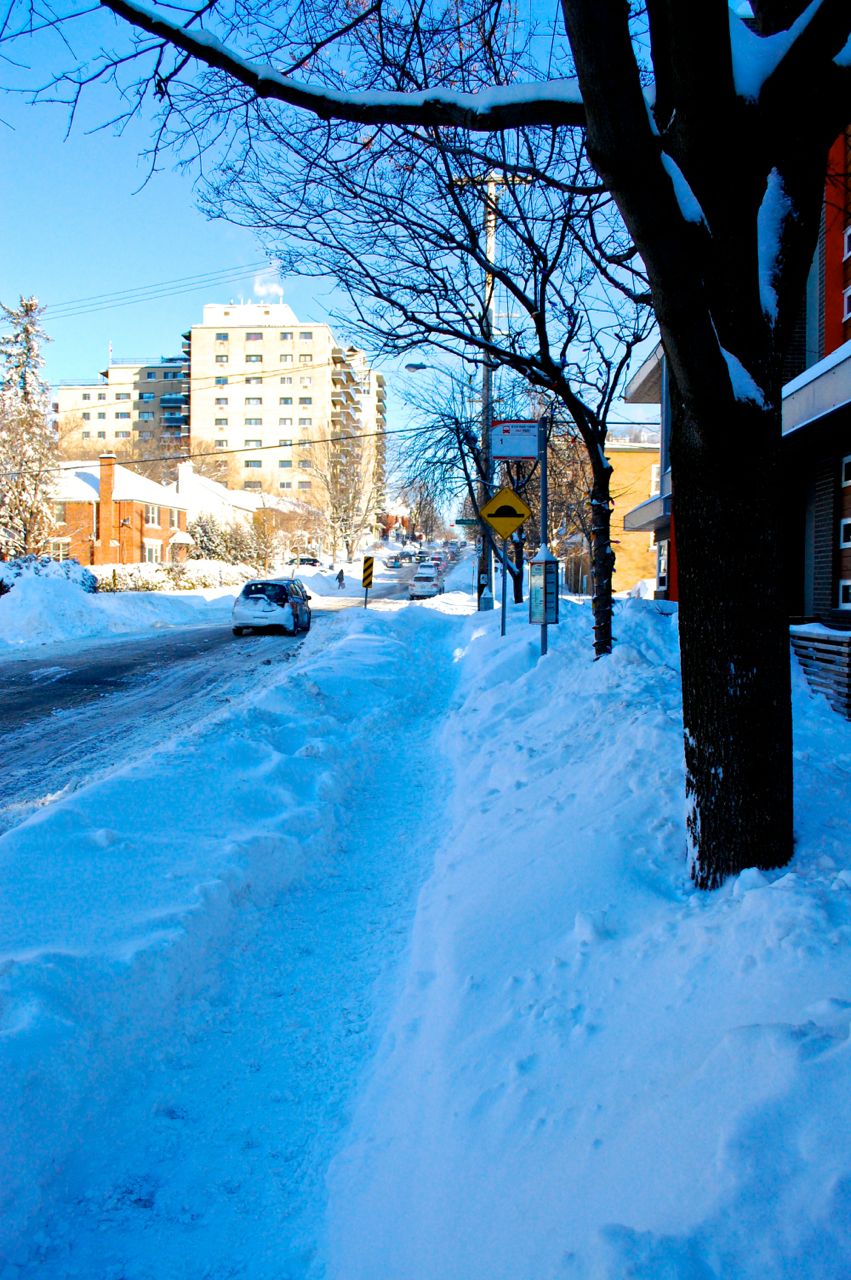 This being our sixteenth winter in Hades, we've learned to clear the front path and the sidewalk in front of our house every one to two hours during a snow-storm. That way, the snow doesn't pile up past our ability to shift it.

I clear the sidewalk from the bus stop, which is about ten feet to the left of the house, through to the opposite side of the driveway on the right side. (Not having a car, we leave the driveway for our neighbours to clear -- who do, and who do.)

My motivations are three-fold:

1) I come from Victoria, where your civic responsibility is to clear the sidewalk in front of your property. Mind you, Victoria has little in the way of snowploughs.

3) When we came here fifteen years ago, I accompanied elder daughter to school, pushing younger daughter in a stroller, so I really appreciated cleared sidewalks.

A week or so ago, during the opening hours of a snow-dump that would exceed previous records for Ottawa - though not, ironically enough, for Victoria - I was out making a dent in the damage.

A twenty-something/thirty-something fellow was zigzagging up the middle of our street brandishing a large shovel, but not using it.  Spotting me labouring away with my royal-blue ergonomic number, he strode to the opposite end of where I was digging.

"Watch out!" he warned as he ploughed by, forcing me to leap into a nearby drift.

He then swooped in and out of our front walk, shouldered his shovel, and marched past me.

Slightly stunned, I wordlessly watched him continue up the hill, zigzagging up the middle of the street, not stopping to shovel anywhere.  He vanished into the whiteness.

What  was that? I wondered.  Machismo? Helpfulness?  A demonstration of my shovelling shortcomings?

It did make my job easier.  As I was tidying up what he'd left, another fella trotted through on the cleared pavement.

I just chuckled, because I didn't see any point in explaining that this wasn't all my work.

Less than an hour later, it looked like I (and he) hadn't shovelled at all.

Sixteen winters have taught me to go out and clear it again.

I did see someone with a double-stroller struggling through where the sidewalk wasn't -- until she reached the stretch in front of my house and rolled easily through until the sidewalk disappeared again.
Wailed by Persephone at 2/29/2016 07:33:00 pm No comments: