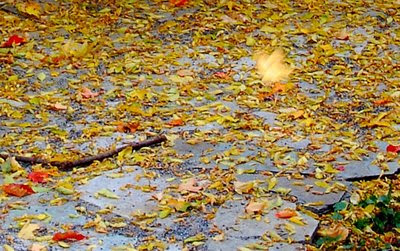 Are all superstitions delusions or proof of impossibly magical thinking? I think superstitions can be useful metaphors. Take lucky pennies (and I do, at every opportunity). I found five last weekend, and I saw them because I was not rushing, I happened to look down, and I was willing to stoop to scoop them up. The Resident Fan Boy is fond of saying that luck is preparation plus opportunity. A lucky penny illustrates that nicely. If I'm with someone, I hand it to them, saying: Find a penny, give it away; have good luck for the rest of the day. That's not magical thinking; that's a reminder.

So every autumn, I try to catch falling leaves. It's actually devilishly difficult. If the wind is high, they whoosh above my head. If the wind is low, there are few leaves that appear to drift lazily down, but dip and slip off in a random directions even as I reach. Others fall in scores just where I'm not standing. See, I read in a book in the school library that every leaf caught while falling is good for a wish. I aim for six leaves each year, three leaves per the two most desperate desires from my own personal Mirror of Erised. (Check Harry Potter and the Chamber of Secrets if you don't catch that reference. That J.K. Rowling knows some dark truths about the human psyche.)

Thus, every tree becomes a tree of dreams: fiery ones, crimson and scarlet ones 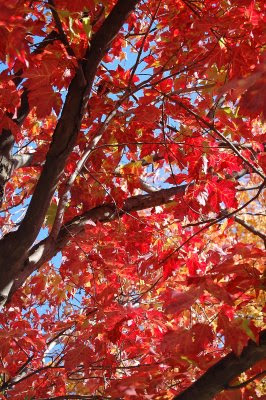 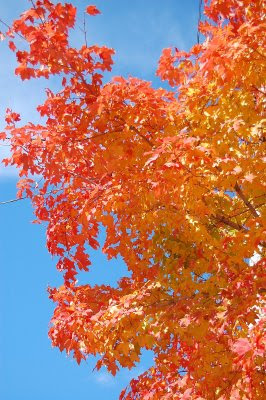 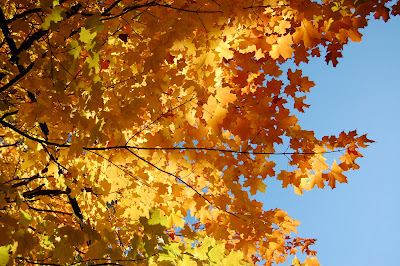 And what prevents me from catching leaves? Sometimes someone is approaching me and I feel too self-conscious, sometimes I simply don't have the speed or agility, sometimes I don't want to trespass or get run over, sometimes my arms are full, and sometimes a child is holding my hand. See? It is a metaphor...

This morning, I made the time to catch leaves, but I always seemed to be standing in the wrong place. As I made my way down the hill, a gust blew a shower of them across the street, and I swept my arms towards my chest, looked down and two golden maple leafs were clutched to my left collarbone. I kissed each and made my wishes, tucking them in my breast pocket. A few minutes later, an ash leaf sailed by and I simply reached out and snatched it from the air. This brings my total to four because last week when I was taking most of these pictures 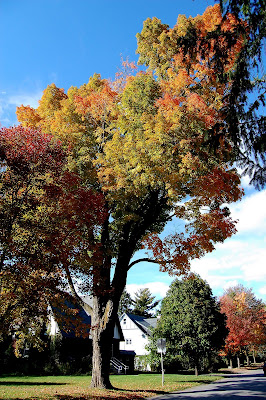 (in fact, it was while I was taking this very picture), a leaf swooped down and landed on my left shoulder. I tell you, my friends, in all my years of leaf-catching and wish-snatching, that has never happened before. Nor is likely to happen again.

Oh, and as for my Mirror of Erised wishes? They may be on their way, but no signs yet. And if I tell you what they are, everyone knows they'll never come true. (No, nothing to do with David Tennant...) 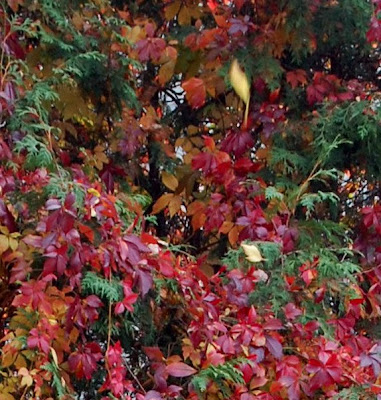 Those photos are beautiful. I've never caught a falling leaf in my life - which must explain everything.

Dearest Real P.: There's no time like the present! There must be a plethora of Brooklyn beauties tumbling down; go get 'em!

What a lovely lyrical post Persephone. I am currently looking out at our silver birch covered in golden leaves, and there are so many of them I'm bound to catch one (and I can do it in the comfort of my own garden so no looking a fule for me). Actually though, all my dreams are coming true at the moment vis a vis the writing, so I'm not sure I'm in the greatest need at the moment. But what a lovely thought....

PS Have you noticed on sunny autumn days, how the golds/reds/oranges positively dance on the trees and crunch satisfyingly under your feet, but on grey miserable days (of which we have had several this week) they look drab and drear and the ones on the ground look dried up and miserable? Or is that just me???

Well, Jane, have you ever seen a central Canadian autumn? (I know you have relatives here, so it's a genuine question.) The variety and brilliance of the leaves even brighten up a dull day. The "falling leaf" photos were taken on such a day, and the overcast sky serves as a perfect filter.

just arrived from Belgian Waffle... loved the first entry i reached and will definitely use up a lot of brain cells and creative time reading the rest. but i must warn you -- dream not of david tennant. he is not for you. he is not the time lord you're looking for.

in other words, he's mine.

There's a lot of that going around! Welcome! (I can just dream about him a bit, can't I?)

Persephone, alas, shamefully have never made it out to Canada, and probably not likely to till the sprogs are a bit bigger. But you're making me think I should come in the autumn. Those pics are fab!

well, my dear, there's nothing to stop you dreaming... if you are all right with hopeless dreams.

i'm alright with them, obviously.

Hee... ah ladies, we have such sweet hopes. Bonnie: question - does that mind control thing always work? I think its effect gets diminished by the internet.

great pics btw. I remember being in NYC looking over Central Park in the autumn and the sight of all the trees was just breathtaking - Canada I'm sure would beat that for scope but there is something about a range of trees at this time of year.

These photos are gorgeous. I keep meaning to take photos myself of the stunning autumn foliage in Germany, but always end up just staring wide-eyed, a little sad in my heart because most of those leaves shall have disappeared the next time I paused to appreciate. Autumn is truly that happy-sad time of year.