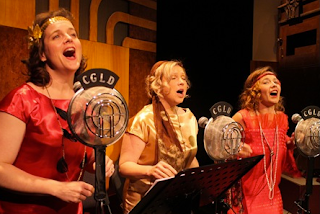 The Resident Fan Boy and I were a bit leery about Winnie the Pooh: The Radio Show, but younger daughter said she wanted to go, so we purchased tickets for an evening show, reasoning that we were less likely to be overwhelmed by ankle-biters. However, the audience, which filled the Gladstone Theatre, ranged to pre-teens to the elderly.

Then five actors assembled in front of microphones disguised as old-fashioned radio microphones, along with a sound effects man with a slight drinking problem and a box of sound effects for The Christmas Carol. He would have to make do with improvisations on a handy Christmas wreath.

The cast had just received the script for Winnie the Pooh, arrived by mail from the BBC. The parts were assigned, and one fellow wanted to be Tigger, but was informed that it was 1925, and Tigger doesn't appear until The House of Pooh Corner in 1928.

"But if it's 1925, how do we know all this?" asked the would-be Tigger.
The man voicing Winnie the Pooh shrugged: "Wibbly-wobbly, timey-wimey stuff."

The Resident Fan Boy, who was wearing his new Doctor Who Christmas sweater, applauded.

And the evening proceeded, with sly references to Canada in 2015 from a sometimes anachronistic ninety years earlier. What was not quite so anachronistic was a mild example of 1920's anti-semitism. What was really anachronistic were the tunes from the Disney version of "Winnie the Pooh".

Younger daughter didn't care. She had jazz, she had a bit of Disney, and she had Christmas. And the Resident Fan Boy had a Doctor Who reference.