Just as long as I don't get two in a row 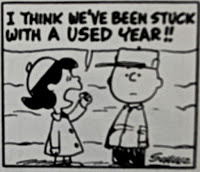 One of the tougher things about coming to Hades has been the more frequent occurrences of what I call "used years". I stole the idea from Charles Schultz, of course.

What's a used year? It's a year that diminishes you. You struggle through the quicksand of the approximate twelve months, only to discover that a better aspect of you has been scraped off: 2002 - 2005 - 2008...

I had used years in Victoria as well. The year my father left for the last time. My final year of high school - I barely got out alive. The year the Resident Fan Boy lost his job and his mother. Those years, however, had plenty of space between them. Since I came to Hades, it seems I've had a "used year" every two to three years, and frankly, the years in between haven't been something to write home about, which explains why my mother complains about not getting letters.

On the optimistic side (and by "optimistic", I mean "I haven't been killed, so I must be stronger --- right?"), I have coping mechanisms. You see a lot of them on this blog: art, music, drama, books. Anything beautiful. Exercise (believe it or not). Creative visualization. Family research. Getting out of the house. Accomplishing small goals. Reaching out to friends.

The last is difficult because my friends have their own problems, and I don't want to reach out and drag them under.

I don't want to drag you under, either. So I'll shut up.

Far from dragging me down, your blogging coping mechanism enriches my life by introducing culture which I wouldn't otherwise encounter. More coping please.