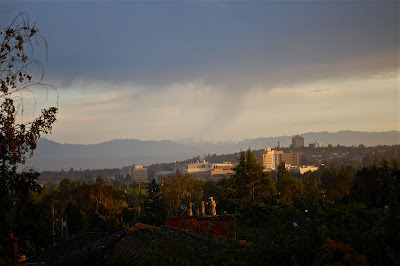 I locked the door late that sunny afternoon, and as younger daughter and I headed out into the street, noticed for the first time that there was a wall of dark grey closing off the eastern horizon.

That's all right, I told myself. I felt the breeze on my cheeks as we turned west. That meant the storm was blowing east, surely. 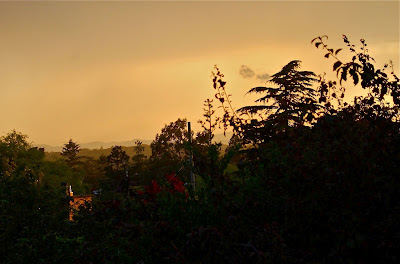 As we approached the Dairy Queen, a twenty-minute down-hill trot, I noticed that the clouds appeared to be keeping pace with us, rumbling all the while. Still, the sun shone brightly, so brightly that younger daughter and I took seats well inside the restaurant. 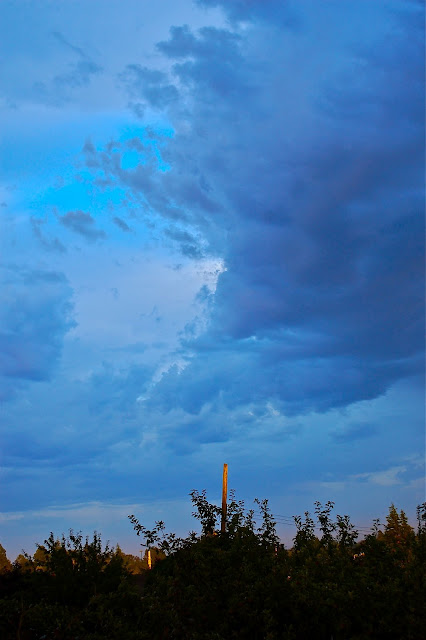 By the time we finished our meals and got up to order our ice creams, we noticed that it was raining outside. I had not brought umbrellas. We decided to eat our desserts inside, in hopes the rain would subside. 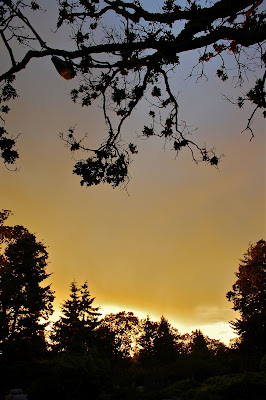 It did, after a fashion, and a bus came immediately. At our home stop, the rain-drops were still almost dodge-able. We hurried the final few blocks. Younger daughter was the first to spot the lightening forks. I counted off after the flashes -- just a few seconds. Too close. As we got in the door, it got very dark, I hurried to the other side of the house and could see the storm sweeping in a diagonal line across Oak Bay towards us.
Gee, we're high up, I thought, noting the reason that I had such a great view was because I could see over the tree-tops below the house. 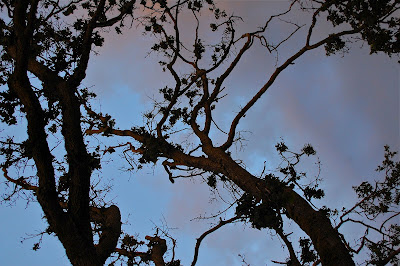 Four hours later, as the storm continued rumbling overhead, another thought occurred to me, and I started the search for candles in this house-sit. I placed them, with matches, at the end of the dining room table where I could feel for them if necessary.

It wasn't, but the flashes continued into the early hours of the morning.

(This happened last Friday, but it was only today that I found a coffee shop with strong enough WiFi to upload the pictures from my laptop online.)

Great photos! 4 hours? That was a big storm. I love being snug and indoors when there's a storm going on.

At least seven hours, SOL! Thunderstorms are quite rare for Victoria. The only problem with that is that people tend to go out to watch them....