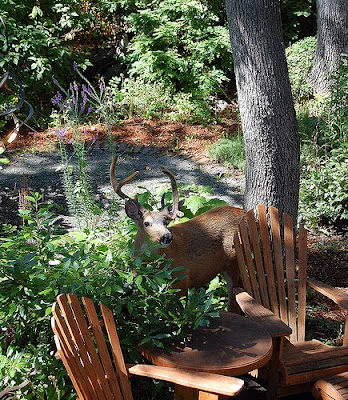 So the Resident Fan Boy turned up on the doorstep today (yes, I was expecting him), and younger daughter is so relieved, she's been practically purring all afternoon.

This evening, I took advantage of his presence to wander around the outsides of the house-sit and spray the plants. Rain on St Swithin's Day notwithstanding, we seem to be settling in for the usual Victorian dry August.

I startled a rabbit that fled across the street into a more manicured garden. At about this time last year, I was engaged in the same activity when I spotted a rather majestic buck posing like a lawn ornament in the same garden where this year's bunny had high-tailed it. I stood and gazed at him from behind the tangle of BC native plants that make up this house-sit's garden (much to the annoyance of the well-manicured neighbours, I suspect), when an elderly lady, complete with full-length velour dressing gown, suddenly appeared in her doorway.

"Shoo! Shoo!" she shouted again. Nothing. She vanished into the house and reappeared with a large pan and lid which she clanged vigorously.

The buck stood and gazed at her. She retreated, slamming her door. I stood for a few seconds more, decided the show was over, and didn't slam my door. Heaven only knows how long he stood there. He must have gotten hungry for her well-tended plants at some point.

A year later, I wrapped up the hose somewhat untidily. (I save the careful winding for the date of our departure which is two weeks in this case.) I happened to turn as I reached the top step, just in time to spot a large raccoon lolloping back from the same yard across the way. He headed straight into the garden I'd just finished spraying, and spotted me eying him. He seemed resolutely unconcerned, as most raccoons I've encountered are. I knew better than to follow him, and went back into the house. I did not slam the door.

Wow..I thought he was a garden statue at first! Awesome!